This thread picks up from Vivian's remark about the FTA's idea of a trail connecting the BCNP and ENP in the 'Gator Hook trail' discussion.

History tells us that there was once a route connecting the Loop Rd. with what is now the Lostman's 5 campsite in the ENP. Dr. C. Tebeau's book Man in the Everglades says this about the Tropical Development Company's Poinciana development in the Lostman's River area in 1925:

"...the Chevelier Corporation was building the 'Loop Road' west into Monroe County. Visitors to Poinciana drove to a point about two miles west of Pinecrest, from which they then walked six miles south to a canoe landing on a branch of the upper part of Lostman's River known as Lostman's 5."

Tebeau's distances don't look right to me. Two miles west of Pinecrest on the Loop is the head of Dayhoff Slough. From there to the nearest hint of a water trail to Lostman's 5 is more like 10 miles as the crow flies. The old Sawmill Road trail just west of Pace's Dike is a better bet, and Pace's Dike at the SW corner is just over 6 miles from the edge of the mangrove country near Lostman's 5.

I won't pretend to know much about any of these areas, having only made a one short and muddy day hike down the Pace's Dike ORV trail. Tom Caldwell has a photo here taken in Gum Slough, and might I guess that this was where the Sawmill Rd trail crosses the slough?

Other connection possibilities also come from Vivian. She has told me that a member of FTA Cypress South has connected New River with Sunday Bay from the Tamiami Trail, and she gave me a link to an article in the Waterfront News about a recent attempt to canoe south from the Loop to Lostman's. Do you still have that link, Vivian? 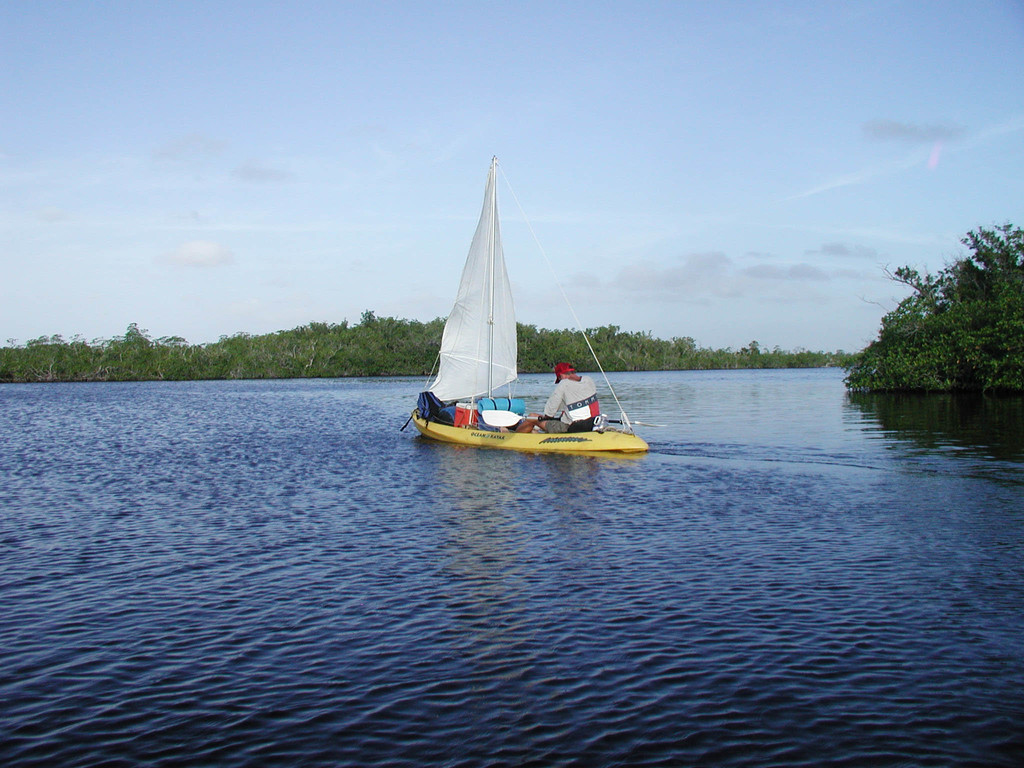 btw, don't know if this is the same article, but this is the Waterfront News article from Dec 2002 regarding the sailing canoe (Tony's) & kayak (mine) from October/November 2001 .  I saved the article on my site:  http://shawnbeightol.com/adventures/saileverglades.htm - I believe this was 4 days - from and old email about it: "we did ~60 miles in 4 days: 17, 19 (both under sail), 11, & 13 (latter 2 humping)." - this was the trip where the hurricane came up out of Honduras and had the park shutdown.  The rescue helicopter tried to lift us out but we waved them off (by Tony's radio)...maybe shoulda accepted?  I herniated my C7 disk as we crossed one of the wide open bays in 45 mph winds.  This took me out of commission for a couple years.

The year prior to that, myself and 2 friends pulled kayaks over sawgrass for 3 days just west of the OLD Kirby Storter Wayside Park on an old jeep trail until we intersected the New River (creek) strand and muscled our way down it to the New River and out Sunday Bay.  I started writing that up (will finish one day when I get my journals out of storage): http://shawnbeightol.com/adventures/GR8NWRVR.htm

I've seen pictures of Tony's Lostman's trip. Not a pretty sight, especially in the grass to mangrove transition.

But hey, it looked like a classic Tony trip!

Here's a picture from my Tony trip down the Taylor. Which, if I remember correctly, was the year after the Lostman's trip, you think I would have looked at the Lostman's pictures & reconsidered. But no, that's why we do what we do and go where we go.  It's my current computer wallpaper. Reminds me of why like to get out into the resource! 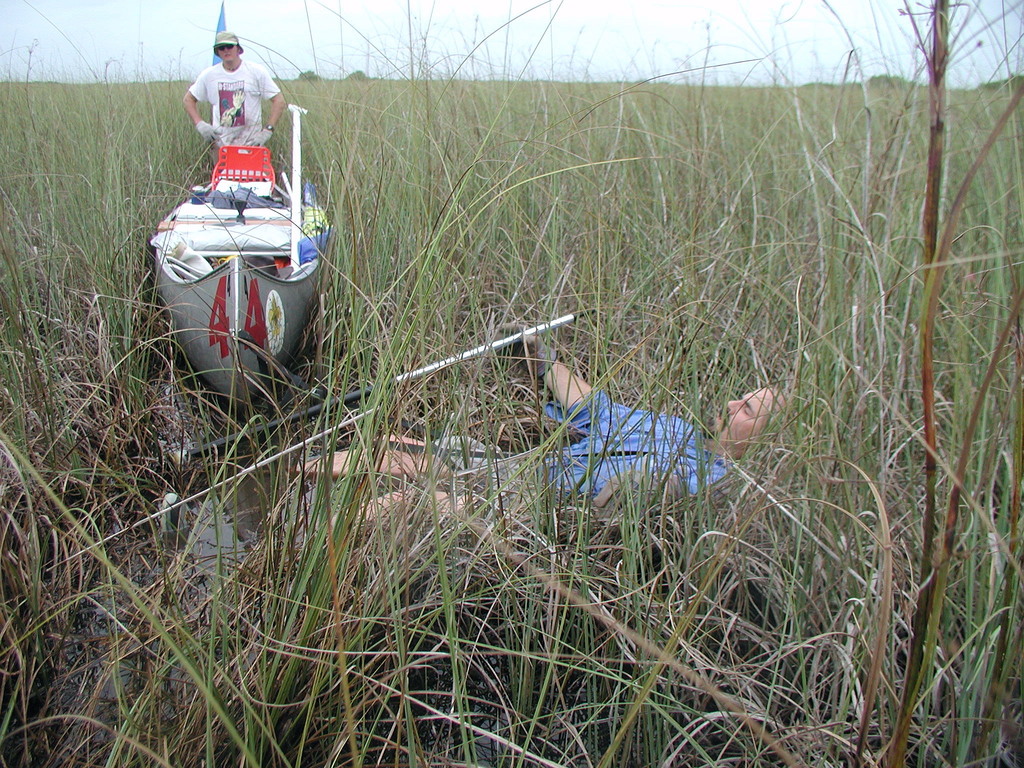 For ease of identification, I'm not the one standing behind the canoe with a look of frustration...

Was it Kalafarski on the ramp that told you about Tony's grassland adventures?

He claims to be getting fishing reports, but I think he's Tony's recruiting agent!

But never say something is not doable until Tony says it can't be done! Hell, they used to say you couldn't sail down the slough...

Yes it was Kalafarski.  And I dug up my pix.  I'll scan the sailing kayak pix this weekend and post them.

Tony did not follow Smuggler's Run, he just did it Tony style, go in a straight line and

damn anything in the way.   HE even said it was hard busting out though the

no problem from Willy Willy, Smuggler's Run fills in the missing link, just like Spoonbill Pass

did for the Inland Route.   The way to do this is to powerboat the canoes and base camp at

Willy Willy just like we did to document Lost Portage.

Let me press upon you the importance of finding Smuggler's Run:  Given the handy camping

situation down near the bottom of the Stair Steps, shorter slough run and starting at the well

So when are we doing it. 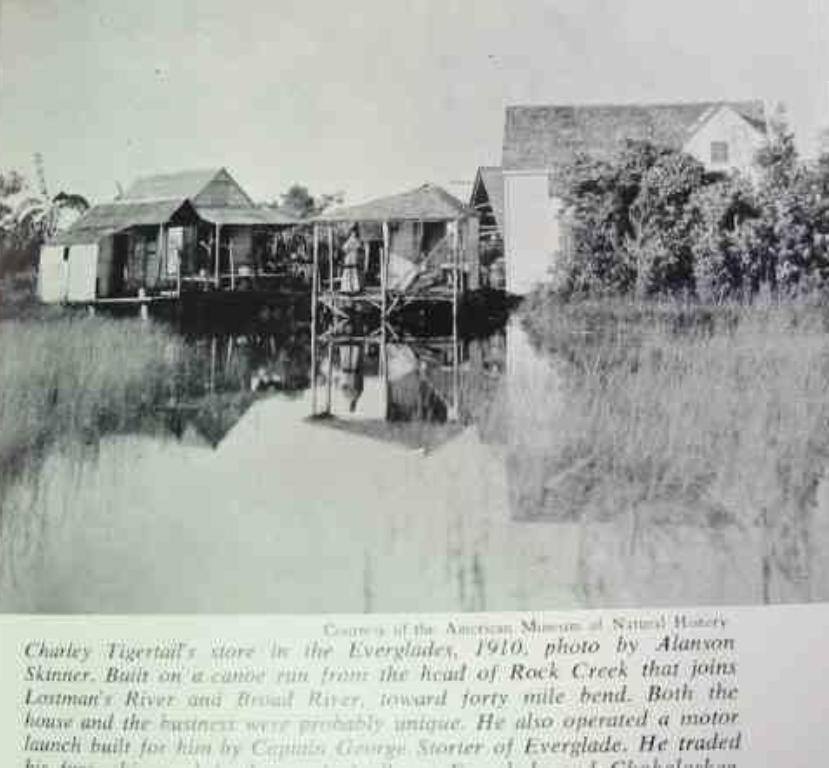 "we changed our course to the northwest and made our way back to the border land between the Everglades and the Big Cypress. Again the islands took on a greater variety of vegetation. Scattering cypress trees and beautiful strands of the same marked our approach to the Big Cypress Swamp. One morning we saw, about three miles to the westward, the top of a wooden building of which Tommy said: "Me think so, Charley Tiger." Following the line of least resistance the three miles became fifteen, and even then we hauled the canoe for half a mile over dry land through saw-grass. It was late in the afternoon when we arrived at a building of boards, across the entire front of which was a home-painted sign: "MR. CHARLEY TIGER TAIL'S STORE." Back of the store was an orthodox Seminole camp, occupied only by squaws and pick aninnies, the men being absent. We camped there two nights and the camera man spent one whole day in getting ac quainted with some Indian girls." 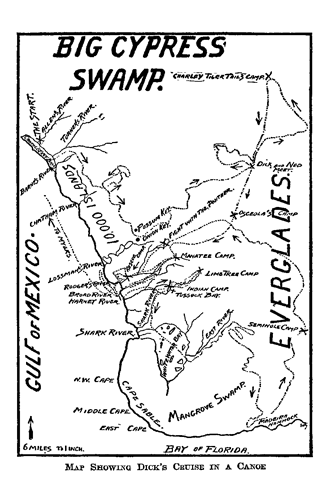 Here's the text of that article:

Keith, this is the link I have and it does not work anymore. I remember it was an article involving Tony Pernas and his trip down.

I did make it a point to ask Bill if he would come onto this forum, hopefully he will. There is a wealth of information from some of our members. They have been quietly but deliberately exploring all kinds of connection and routes.

FTA David Denham and I just hiked the 11.5 miles down to Cocoanut Hammock Wed, 3/28/18 and returned the following day.

I am in contact with the Mitchell family and am hoping they will furnish historical information including info on access to WW from their camp.  They did confirm that they bought the camp from Miccosukees in the mid 50s and that it was a trading post (most likely Dr. Charlie Tigertails I mentioned earlier in this thread).

Cocoanut Hammock is a hammock island in the lower Big Cypress (just north of the Everglades boundary). I believe it was once a Seminole Indian Trading post*. It was bought by the Mitchell Family (who were/are mango farmers in south Dade, see http://historymiamiarchives.org/pdfs/Tequesta2004-p50-83.pdf ). They've built a beautiful cabin with all the amenities of home. You would never notice it on a map unless, like the few dreamers, you pore over a Google earth zoomed in, looking for "Smugglers Route" or some other crazy new adventure.

I attempted to reach it a few years ago bicycling down Paces Dike but got turned back by the deepening water and failing daylight hours.

David Denham, a legendary hiker/explorer of the entire KOE (and beyond) system (Kissimmee, Okeechobee, Everglades - http://www.miamiherald.com/latest-news/article1946243.html ) called me just before spring break 2018 and said "its dry enough to reach cocoanut hammock."

Now, from the looks of the log book (hand written names and messages all over the inner plywood walls dating back to at least 1987), hundreds if not thousands of airboaters have reached this remote private property.

Based on my experience hiking 8 miles on boot sucking marl...then descending gradually the last 3 miles to thigh deep water (yes, I checked the water stations, MO214 just below Cocoanut read 2 inches), I can say this hike was one of the toughest in my life.

Not knowing whether the ground water would be sweet or brackish, I packed 6 liters for the 2 days and brought my filter.

Thankfully, the water was sweet and we could dispense with carrying too much water the way back, we just stopped and filtered along the way.

On the way back, I began to feel burning on the outside of my left knee. Analyzing the pain with respect to the wading/slogging action, I concluded that a ligament (Lateral collateral ligament) or connective tissue related to lifting the lower leg had become inflamed. After about 2 miles I was at the point where I could barely hobble. I carry an emergency beacon...but the last thing I wanted was to fail. I called ahead to David who was easily out hiking my crippled hobble and we ducked into a tree island for a break. I took 2 ibuprofen and fashioned a muscle assistance contraption that I used to raise my foot each step for the next 8 miles! It worked like a charm.

The last mile, suddenly my right knee exhibited the same debilitating pain and again I called out to David and I took 2 more ibuprofen and switched my contraption over to the right. My left knee was fully recovered and strong and the device allowed me to finish the hike.

We exited the woods just as the sun set.

That's how we like to do it - the last light, the last strength, the last food, the last water...

*I do not believe the current Dr. Tiger hammock is the site of the old general store/canoe trail and dock. It seems too landlocked.

I believe that the current Cocoanut Hammock was the site of Dr. Charlie Tigertail's camp/general store.

In conversation today with the Mitchell Family (see here for their history as Miami pioneers: ), they confirmed that it was a miccosukee trading post when they bought it from the Miccosukees in the 1950s.

here is a map (https://www.floridamemory.com/items/show/323159 ) that puts Ingram Billie's camp at about cocoanut hammock and Dr. Charlie Tigertail's camp on the turner river. Problem is, I think this map has them switched (you'll see some of the numbers are poorly written and possibly duplicated as though not certain). To support my theory that cocoanut hammock was Dr. Charlie Tigertails general store, this page suggests that Ingram Billie's camp was actually on the Turner River: https://www.floridamemory.com/items/show/268152

This latter identification of cocoanuts as Dr. Tigertails location is congruent with the Mitchell family record. 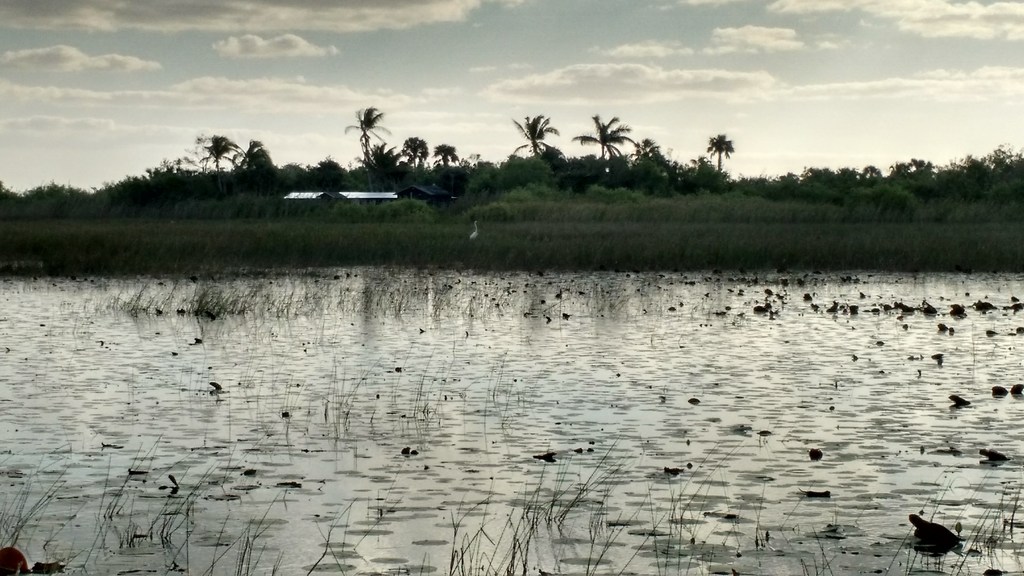