Before Hurricane Andrew the preferred paddle route between Flamingo and
Cape Sable was the Homestead Canal. Avoiding the open bay provided a
wind protected route and separated paddle craft from power boats. It also
guaranteed solitude and remoteness by staying in the back country wilderness.
The 1992 hurricane damaged Homestead Canal with downed trees making passage
very difficult. As it became less traveled, foliage growth accelerated and
the 2005 storms made the canal impassable. After Hurricane Wilma a plan was
created to reopen the canal and a volunteer group headed by Tom Rahill and
Jim Brack took on the project. They cleared the canal to Bear Lake and
reopened the Bear Lake Trail which loops through Mud Lake and comes back
down Buttonwood Canal to the Bear Lake parking lot. The section of
Homestead Canal between Bear Lake and Gator Lake remained impassable,
cutting off the inland route to Cape Sable.

Sue Cocking, Bill Evans, Terry Helmers and Jay Thomas devised a plan to
survey the damage to the canal west of Bear Lake and search for an alternative
passage through a body of land between the waters of Bear Lake to the east
and open water to the west. Previous trips by Thomas had identified
the narrowest section of land between these two waters which was called 64M
but there was another slightly wider area of land that warranted
investigation. If a navigable route could be established through these two
bodies of water the entire stretch of Homestead Canal between West Lake and
Gator Lake could be abandoned. It would also establish a natural route from
Coot Bay Pond to Cape Sable - the ultimate trophy. The group also had heard
reports of a route that went into Bear Lake with a portage over the narrowest
piece of land between the canal and the lake.

On 18 January 2014 the four set out in 3 canoes from Bear Lake parking lot
and went directly to the narrow area between the lake and canal. The last
time Helmers had paddled the canal was 28 years ago when there was nothing
at this narrow spot. This time, the explorers found ruins of what appeared
to be a dock that could have been built to assist portaging. It's assumed
that shortly after Hurricane Andrew an attempt was made to keep the
Inland Route open by using as much of the lake as possible to shorten the
length traveled in the canal. Today there's a small break in the narrow spot,
making it easier to slide a canoe through this slot and back into the canal.
After doing this, the group continued west through near impassable
"jack straws" (a sawyer term for criss-cross piled trees) but after making
headway of only a couple hundred yards in an hour the effort was abandoned
and the canoe party returned to the lake to continue west in Bear Lake and
then across the lake to its' west. Since Thomas had already examined the
narrowest portion of land barrier between the east and west the decision was
made to continue directly to the other narrow spot just south of 64M. After
negotiating mud bars a small creek-like opening was spotted. Although there
was a 3 foot mat of pneumatophore roots to be portaged, the creek continued
west with a hard twist to the north then west again to the open water of the
"other side". After the search party spooked a spoonbill at the west mouth
of the creek it was quickly dubbed Spoonbill Pass. Knowing "this was it" all
agreed to ignore 64M and paddle the shallow but open water to Gator Lake.
How ironic that paddlers spent decades paddling back and forth in a straight
as an arrow canal, how ironic that a large dock was built to go over the
narrow spot between Bear Lake and the canal, how ironic spending the effort to
keep trying to push through the canal between Bear Lake and Gator Lake when
there was a beautiful natural creek waiting for paddlers at Spoonbill Pass.

On 20 January 2014 Terry Helmers launched at Coot Bay Pond to
specifically survey and map the Spoonbill Pass area. Although launching at the
pond meant it took 2 and a half hours to get to the pass, it reduced the
paddle distance in the canal to just 200 yards between Bear Lake Trail and
Bear Lake. Two additional non-portage creeks were mapped with the optimal
route going from 09.858'N and 59.397'W to 09.857'N and 59.447'W. After two
rewarding explorations, a natural route from Coot Bay Pond to Lake Ingraham,
Cape Sable has been established.

To use the Inland Route, study and printout or download maps of the area.
Carry a spare GPS unit. There's a lot of shallow water throughout the trip
but it's all open paddling.

This is a map of the Spoonbill Pass area.   The white lines are open and paddle-able routes, 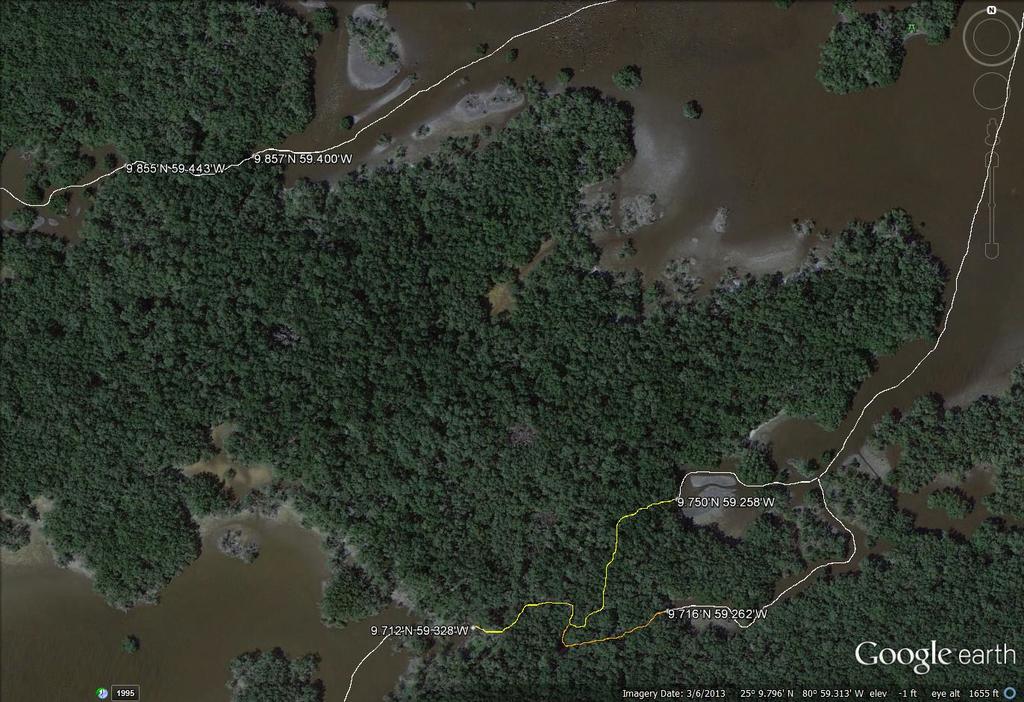 It was certainly an excellent day of paddling and exploring. I don't think I have ever seen such glassy conditions in the morning. I put together a video of the trip.

And a couple of GPS plots. Perfect weather, lots of wading birds, large flocks of ducks, a few flamingos and spoonbills. It was my first solo canoe trip in the tandem ole towne. It went well, but generally trailing behind Terry and Jay. Especially the last leg across Bear Lake. Water levels were 8" to A foot below the highest barnacle markings on the roots. Depth was 1 to 4 ft most places, much deeper at each end. photos are Bear Lake and Gator lake. One item complete in my bucket list!  Next Cape Sable campout via Spoonbill Pass!!

Terry, thanks for doing a second recon trip to find the way to Gator Lake.  In your image, is the Spoonbill Pass the 9.857'N59.400'W location?  I can't really tell which are the yellow or orange vs white lines on my computer.

So now we have to plan a cape sable camping trip one of these weekends before the weather turns to summer. How difficult is the portage to East Cape canal?  Here is a picture of my friend Toby on that dam and it looks like a slippery ankle breaker ramp. 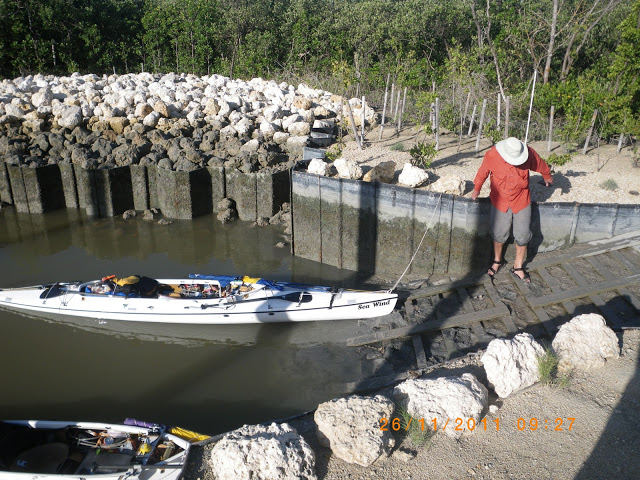 The canal near Jay's track was not clear, the better route may be west of the canal then head south then access the east-west canal or keep going SW, bypass the canal through the wet flats down to creek near the last dam. I started some route planning in that section on Sunday.

Vivian - my recommendation would be to:

1. After Spoonbill pass - never enter the canal and move ESE towards the creek that bypasses the pug as shown on this photo.

2. Enter the canal as soon as possible (maybe you want some shelter from the wind) and exit as late as possible and go to the bypass creek.

3. Stay in the canal the whole way and do the portage.

4. If you want to go to Lake Ingram - stay straight and do the west portage.

Let's talk, I'll be going out there. Permalink Reply by vivian on January 21, 2014 at 9:17pm
Jay, that exit to east cape canal is what I was looking at too. I wonder if that is deep enough to float the canoes? I am in for east cape overnight camping trip weekend of February 1st will that work for you? BTW loved the video you are on a roll.

Terry, I like your thoughts on taking coot bay pond to this area and finding the natural water trails. Good work!

This GE photo below is an untested route that uses the end of Jay's route above at Gator Lake. This route is 6.9 miles vs the canal estimate of 5.4 miles. Evidently the cut backs add distance. The scenic route usually is longer and slower. Anyone now of any tide gauges online in the area?

I would expect the south creek to be deep since all that water to the NE drains out there. Also look closely at the water color in the canal/creek connection. Center canal water is silty grey from large volume flows from Lake Ingram. The creeks on the west and east are slightly greener which implies less silt which was deposited and knocked out of the flow at each turn. The east creek has sharp clean edges along the mangroves indicating undercut banks or hard sharp banks due to erosion from creek flow. Both signs of deep moving water. In the flats, there is evidence of flow in the long slow curves and shading of the green, possibly grass beds, which implies slower watershed, flat and wide flows but some slight depth increases in the center of each flow.

Permalink Reply by vivian on January 21, 2014 at 10:37pm
Bill, that is the route I was working on but was afraid water levels would not be high enough. Is the canal totally blocked? I was thinking an alternative was to take the canal to an area that appears to have good flow on satellite images
Attachments:

It looked blocked right at the point where our     east-west track crossed the trail, near the BLTcut10w point is on my map. We did not review the canal south of that point.

Permalink Reply by vivian on January 22, 2014 at 6:26am
I just found Bob Quirks response in another thread:

"If you made it to Gator Lake than you made it to the Cape. The canal from Gator to Lake Ingram is wide open. Be careful back there it's easy to get lost and have trouble finding the creek entrance back to Bear especially after dark. I use surveyors tape which I gather up on the way out. The Trail has become my preferred route to the Cape since I paddle a 17 ft solo canoe with a canvas deck. There is also a small passage from Bear into the canal on the NW side that gets you to an interesting area for a walk. A suggestion for transiting the entire canal in a day. Get a friend with a power boat to mothership you canoes/kayaks to the dike at lake Ingram then paddle back. Good luck and stay out of trouble back there the ranges do not want to get hit with a bunch of search and rescue."
▶ Reply