Before Hurricane Andrew the preferred paddle route between Flamingo and
Cape Sable was the Homestead Canal. Avoiding the open bay provided a
wind protected route and separated paddle craft from power boats. It also
guaranteed solitude and remoteness by staying in the back country wilderness.
The 1992 hurricane damaged Homestead Canal with downed trees making passage
very difficult. As it became less traveled, foliage growth accelerated and
the 2005 storms made the canal impassable. After Hurricane Wilma a plan was
created to reopen the canal and a volunteer group headed by Tom Rahill and
Jim Brack took on the project. They cleared the canal to Bear Lake and
reopened the Bear Lake Trail which loops through Mud Lake and comes back
down Buttonwood Canal to the Bear Lake parking lot. The section of
Homestead Canal between Bear Lake and Gator Lake remained impassable,
cutting off the inland route to Cape Sable.

Sue Cocking, Bill Evans, Terry Helmers and Jay Thomas devised a plan to
survey the damage to the canal west of Bear Lake and search for an alternative
passage through a body of land between the waters of Bear Lake to the east
and open water to the west. Previous trips by Thomas had identified
the narrowest section of land between these two waters which was called 64M
but there was another slightly wider area of land that warranted
investigation. If a navigable route could be established through these two
bodies of water the entire stretch of Homestead Canal between West Lake and
Gator Lake could be abandoned. It would also establish a natural route from
Coot Bay Pond to Cape Sable - the ultimate trophy. The group also had heard
reports of a route that went into Bear Lake with a portage over the narrowest
piece of land between the canal and the lake.

On 18 January 2014 the four set out in 3 canoes from Bear Lake parking lot
and went directly to the narrow area between the lake and canal. The last
time Helmers had paddled the canal was 28 years ago when there was nothing
at this narrow spot. This time, the explorers found ruins of what appeared
to be a dock that could have been built to assist portaging. It's assumed
that shortly after Hurricane Andrew an attempt was made to keep the
Inland Route open by using as much of the lake as possible to shorten the
length traveled in the canal. Today there's a small break in the narrow spot,
making it easier to slide a canoe through this slot and back into the canal.
After doing this, the group continued west through near impassable
"jack straws" (a sawyer term for criss-cross piled trees) but after making
headway of only a couple hundred yards in an hour the effort was abandoned
and the canoe party returned to the lake to continue west in Bear Lake and
then across the lake to its' west. Since Thomas had already examined the
narrowest portion of land barrier between the east and west the decision was
made to continue directly to the other narrow spot just south of 64M. After
negotiating mud bars a small creek-like opening was spotted. Although there
was a 3 foot mat of pneumatophore roots to be portaged, the creek continued
west with a hard twist to the north then west again to the open water of the
"other side". After the search party spooked a spoonbill at the west mouth
of the creek it was quickly dubbed Spoonbill Pass. Knowing "this was it" all
agreed to ignore 64M and paddle the shallow but open water to Gator Lake.
How ironic that paddlers spent decades paddling back and forth in a straight
as an arrow canal, how ironic that a large dock was built to go over the
narrow spot between Bear Lake and the canal, how ironic spending the effort to
keep trying to push through the canal between Bear Lake and Gator Lake when
there was a beautiful natural creek waiting for paddlers at Spoonbill Pass.

On 20 January 2014 Terry Helmers launched at Coot Bay Pond to
specifically survey and map the Spoonbill Pass area. Although launching at the
pond meant it took 2 and a half hours to get to the pass, it reduced the
paddle distance in the canal to just 200 yards between Bear Lake Trail and
Bear Lake. Two additional non-portage creeks were mapped with the optimal
route going from 09.858'N and 59.397'W to 09.857'N and 59.447'W. After two
rewarding explorations, a natural route from Coot Bay Pond to Lake Ingraham,
Cape Sable has been established.

To use the Inland Route, study and printout or download maps of the area.
Carry a spare GPS unit. There's a lot of shallow water throughout the trip
but it's all open paddling.

That sounds more like it was the times I attempted it and there's hardly anything more frustrating than getting most of the way there and having to turn around. I'm going to be revising my FalconGuide to Everglades National Park and the Surrounding Area soon so I'll make a note that the inside route is only available during seasons of high water. I would think tide levels back there probably only play a minor role, plus it could be high tide on the outside and still be falling back in that region.

I'll bet tides, not daily but monthly, in addition to the annual flow of freshwater

will play a roll in determining the levels in Raulerson Prairie and Spoonbill Pass.

annually.   Interestingly the level fluctuates precisely on just an annual basics on the other

side of the highway at the Noble Hammock Landing.   I'm thinking it has to do with the

ridge along the north shore of Florida Bay that doesn't allow tidal pressure to hold back water.

On the west side of the road there is no ridge between the Jungles and Whitewater Bay, it just gets

more open as you travel toward the bay.   This monthly tidal pressure effect on the steady

different dates:  It was slightly higher 1 February than 2 weeks earlier, the opposite of water level

steadily falling going into the dry season.  With Whitewater Bay on the north and

making it even more susceptible to tidal action.

The bottom line:  There are no water stations near Spoonbill Pass (or at least none reported on-line)

so a lot could be learned from someone recording the notches on the pipe at the Bear Lake Trail landing.

Like the 4x4 stub we hit at the entrance into Bear Lake, knowing those notches would be a sure

indicator of the pass-ability of Spoonbill Pass.

It would be interesting to have a probe done from the East Cape canal creeks into RP. If someone had a powerboat that would hold a canoe or kayak and could anchor in the canal and deploy the kayak/canoe and head up the creek into the praire to record the water level at end of Feb then again in March. Regardless, if you cannot get from Bear to the prairie via spoonbill pass then the route is as I suspected very seasonal and passable only up to end of January or beginning of Feb.  However if the canal was open  at that junction from Bear Lake to Gator Lake then one could still use the prairie if water levels high throughout February possibly into March?  The option being a canal trip until it intersects with C3 down the praire to the creeks. But since the canal is impassable, no sense in trying it.

I was wondering if anyone has recent information about traversing the "Spoonbill Pass" route out to Cape Sable. Seems like the last posts were all in 2014. I was thinking about exploring this route during a visit end of December (probably 23-24). Comments/suggestions? Thanks!

Esther & Flex were poking around back there from the Bear Lake side last weekend as part of the Paddlers Rendezvous.

Not sure how deep they went/got.

Steve, I was back there in September and paddled into Gator Lake okay. Obviously it all depends on high water and it's been higher than normal back there recently. Your problem will be that once you clear Spoonbill Pass into the open water area you can still get mired in mud and there's nothing you can do except turn around, and that's a big bummer if your destination was to camp on Cape Sable.

'Special Use' permit not a 'Backcountry' permit. 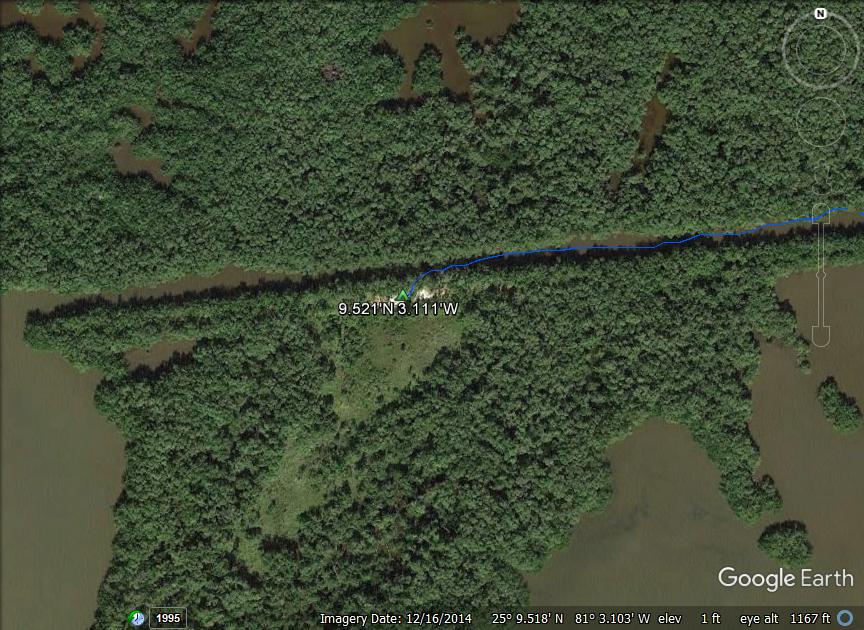 There's another one at Gator Lake but it's smaller and very shady, requires a cold night.

Is there anyway to determine the appropriate water level prior to disembarking?

Not really because water levels fluctuate up and down so slowly back there and have little to do with the high and low tides in Florida Bay. The tides can be on the rise in Florida Bay when the backcountry is still slowly draining. I'd try to time your trip somewhere around the full moon when water levels will be highest.

the water, you're going to have ketchup in the west side of the lake going into Spoonbill Pass.   The west side

of the pass is as Roger describes, more of a monthly tidal thing.   There's a gauge at the dock landing of

Homestead Canal, but the gauge, dock, and Tom's cleaned out canal is never used since the gate is always

Cool, thanks. How's the Homestead Canal between Bear Lake and Buttonwood Canal?

It was easily passable the last time I paddled it but I tend to launch at Coot Bay Pond simply because your vehicle is a lot safer there. The Bear Lake Road gate is closed in the summer but open at other times of the year. There's been some problems with a group of immigrants from Homestead fishing at the mouth of the canal and Bear Lake and breaking all sorts of fishing regulations. I've caught them twice. If you want to paddle the Bear Lake Canal then I'd advise leaving from Flamingo and paddling up to the dock in Buttonwood Canal and then portaging over to the canal ramp. It's a little over a mile from Flamingo to the dock. In short, your vehicle will not be safe parked at the end of the Bear Lake Road, especially if you leave it overnight.