Finally got some time to post a short trip report of my 8-day March loop from Hell's Bay out to Willy Willy and back. I won't go into all the details and will focus on the first 3 days of the trip, where I accomplished a long-sought goal of finding an inside southern route that completely bypasses Whitewater Bay, and takes you through some of the prettiest backcountry creeks that nobody ever gets to see. I started at the Hells Bay trail dock and spent my first night at Lane Bay. The Google Earth screenshot shows days 2 (red line) and 3 (green line) of the trip. Day 2 started at Lane Bay and runs through the maze of creeks that Terry calls the Old Camp Route, and crosses Roberts River, North River, and ends at North River Chickee. Day 3 was the most challenging of the trip and followed a long, tortuous series of small creeks and bays we call the North Watson Route, which starts at North River chickee and comes out near the entrance of Watson River. The entire route from Lane Bay to Watson River was passable with deep water in the creeks and bays, and there were no significant obstructions of any kind. If there was ever a prime candidate for an Alternative Wilderness Waterway trail, this is it. Having a route that allows paddlers to bypass the open water of Whitewater Bay is a very nice thing and this will probably become my standard route for future trips along the eastern shores of Whitewater Bay. I will post detailed aerials of these routes in the near future, but you should be warned that they are not marked on the ground, and are for those who already have some experience in following charts and aerials without a GPS. If you're just getting started paddling the Everglades, then get some more experience before attempting these routes, at least until the ENP gets around to marking them. 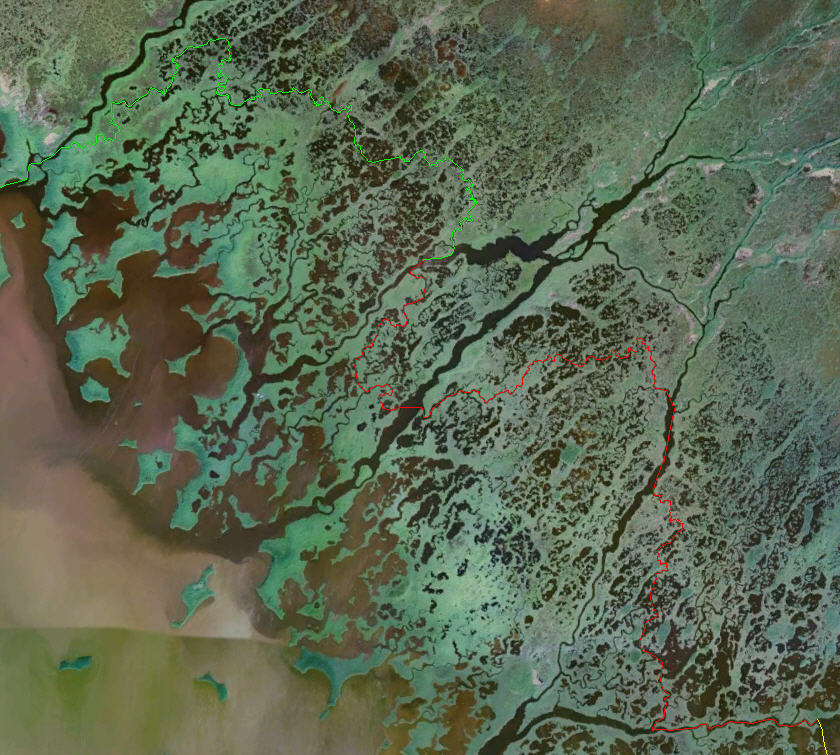 The rest of the trip was pretty much the usual WW stuff. Day 3 ended at Shark River Chickee after a long westerly detour through the Labyrinth to Shark Cutoff, and back up the Little Shark River on the rising tide. Day 4 took me to Broad River via the Nightmare. Day 5 was Willy Willy via the Gulf and Lostmans' River. Day 6 was a bit more exciting, as I got caught by a strong cold front on my way down Rogers River to Highland Beach. 50 mph wind gusts threatened to tear loose the mangroves from the river bank where I was holed up while the front blew through. Day 7 was a wild ride down the Gulf coast from Highland Beach to South Joe River with a 25 mph NW wind screaming at my back while crossing Ponce DeLeon Bay. The wind raised 3 foot standing waves against the falling tide at the mouth of the Little Shark, and I got a little whitewater action there. The last day took me from South Joe River across the south end of Whitewater Bay back to Hells Bay trail, and the end of the journey. 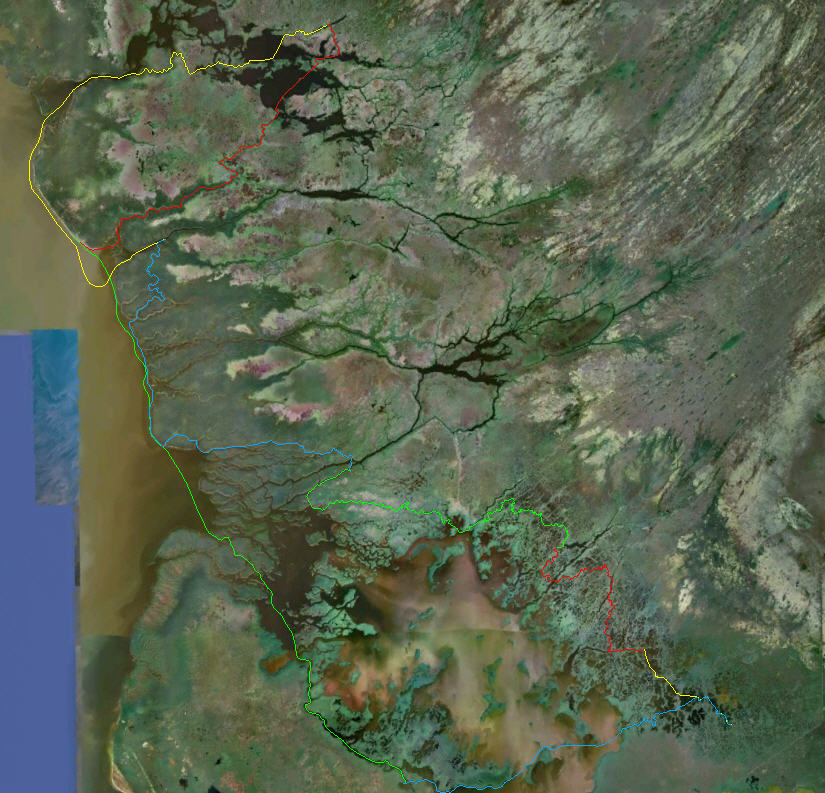 Permalink Reply by Daniel Madrigal on June 28, 2011 at 10:33am
Looks pretty awesome Keith! Good to know there is an alternative route besides just picking between the outside and whitewater.

day 3 was the most challenging of the trip and followed a long, tortuous series of small creeks and bays we call the North Watson Route, which starts at North River chickee and comes out near the entrance of Watson River

Keith, this is wonderful thank you for sharing your trip route with us. How long was that leg of the trip and is that section worth the trouble?

Permalink Reply by Keith W on June 28, 2011 at 7:37pm
No trouble at all and worth every minute! The North Watson route was really nice with lots of bird life along the way. Big flocks of coots at every turn. Took me about 4 hours from leaving North River Chickee to exiting Watson River near the Labyrinth. Zoom in on that area in Google Earth and you can follow the route pretty easily. You MUST be able to closely follow aerial photos, and there is very little margin for error, but go slow and pay attention to where you're going and you will be rewarded. The OId Camp Route (red line) is much easier to follow, so that might be a good route to sharpen your navigation skills the first time you try this.

I don't have one. Whenever I try to dump the route for that trip from the GPS, my computer blue-screens.

Besides, providing GPS routes only encourages those who don't have the skills to navigate with charts or aerials to go out there depending only on their GPS. If the GPS fails or the batteries die out in the middle of an area like that, then they are basically screwed, and the NPS has a SAR incident to deal with.

Good call, use GPS as a back up!

Excellent trip report.... has given me ideas for my WW trip this Nov

Bummer though that the current pics on Google Earth show clouds in this particular area.

Permalink Reply by vivian on June 29, 2011 at 7:28pm
I am also having the same problems trying to get the route mapped but google clouds makes it difficult. Keith, can the images be posted so that we can enlarge them without distortion? I understand your call not to post GPS file I agree with you on this. This next season I plan to do the sections from Lane Bay to North River and the Watson to Shark River Chickee.

Permalink Reply by Keith W on July 1, 2011 at 10:01am
Historical imagery will show you the 12/30/2004 view that I used in my images above. Nothing much has changed in terms of geography since then, so that date will work for planning. The most current imagery resolution is much sharper, if you can get away from the clouds, and that's what I used for my aerials. In places where clouds obscure the details I cut and paste sections from earlier cloudless imagery into my images. The aerials that I'll post later are sized to print on 8.5x11 photo paper and are highly detailed, and some routes cover more than one page. I laminate mine using 5 mil pockets to make them water resistant.

I'd appreciate you posting those aerials. This weekend I'll try to sit down and plot the route on mapsource using the aerials. The clouds are a nuisance on Google I had played with the historical imagery but not down to 2004, thanks for the tip!

Permalink Reply by Juan Estevez on July 7, 2011 at 11:38am
I transfer routes from Google Earth to my Garmin GPS, I find it easier than plotting on Mapsource.


I can converting them to Garmin format using the free utility WinGDB3:

Let me know if you need more details on how to do it. I prefer this method a lot better since Google Earth is the real thing, charts and maps are just drawings, fine if you stay on the main routes but not that reliable when I venture in to small creeks.

Of course if there is another way please share. I have no idea if the paid version of GE allows downloads straight to the unit, the free version only allows from device to GE but not vice versa.

In the below image I'm converting a gpx file into a Garmin route, but it also works converting GE .kmz and .kml 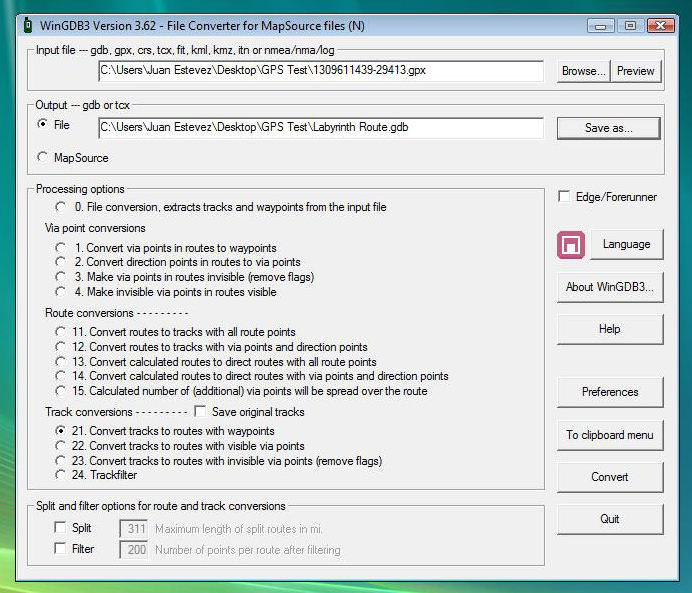 I found yet another way to use google and other aerial charts as a base to plan your trip then transfer the waypoints or route to mapsource.  It is an online tool called GPSvisualizer.  When you get to the main page go to free hand drawing tool it will take you to a second page with world view. Type the location you want to go to (i.e., Flamingo, FL) and you will get a google view of the area.

Using the drawing tool pick waypoints or route tool then save in GPX format (mapsource). This was very easy and helpful in  planning a similar route to Keith's that I will attempt this winter.