Today we drove around the loop looking for potential kayak launch sites. The airboat launch at Mitchell Landing looked promising. We were hoping to reach Lostman's Slough or another potential route. Has anyone gone that way recently?

Does anyone have info on Dayhoff Slough? We also looked at the L67 Canal as a route. Are there any publications or resources covering the water flow in the area?

There is a lot of water on the ground right now. We hope to explore the area during the next cold front, assuming it comes our way soon. Any tips would be very welcome routes, resources, warnings, etc.

Distance without obstructions is not an issue for us. Twenty-five plus miles of open passage is pretty average for one of our day paddles. Realistically though, obstructed passages change the dynamics of travel so overnights are definitely viable. We have moderate backcountry experience, mostly on the 10K and Florida Bay/Flamingo areas. Now I'm looking to fill my craving for deep backcountry exploration. Any and all info will be greatly appreciated.

Oh, yeah, ultimate destination is the Gulf side, Willy Willy, Camp Lonesome, Canepatch. Not all at once but eventually.

Thanks a million for any help!

Permalink Reply by Keith W on October 19, 2009 at 7:43am
Esther, you're talking my language! I've been wanting to explore this area for a couple of years now.

Tony Pernas made the connection between Mitchells landing and Willy Willy last February. This is not an easy trip and there are no established trails once you get past the airboat trails. We're talking serious bushwacking through dense mangroves between Coconut Hammock and Willy Willy. This is nothing like paddling the 10K Islands or Florida Bay.

I've also looked at following the airboat trails south from Mitchells to Coconut Hammock, but instead of heading south to Willy Willy, I'd cut SE and pick up the top of Lostmans Creek ( 25° 35.403'N 80° 59.412'W). Might be a bit less bushwacking through mangroves on that route. Another possibility is the County Line airboat trail that starts from the Loop just west of the BCNP boundary. This might be a good way to get into the Shark River Slough from the BCNP. Having said that, experience tells me that its no easy slog once you get off the trails. Big sawgrass is nearly impossible to push through even in very high water.

Bob Quirk explored the area south and west of L-67 a couple of weeks ago and incurred the wrath of the powers-that-be for daring to sleep in his boat overnight. L-67 is the ideal starting point for a Shark River Slough trip, but you'd best not leave your vehicle parked overnight at the top of the canal if you want to stay under the radar of Park LE. When I made my Slough trip last year I got dropped off and slept in my boat for two nights without encountering any official interference.

Another thing to consider regarding the BCNP this time of year: it is now hunting season and hunters in airboats are heading into the swamps from Mitchells and County Line. There is a 3 week break between muzzleloading and general gun season that you'd want to take advantage of. Oct 25 - Nov 14 is the break period.

Since what we're talking about here is mostly off-trail exploration, I'm moving this thread to the Off-trail Exploration forum.

Permalink Reply by Terry on October 19, 2009 at 11:11am
Esther, go to page 2 of this category in this discussion, there are two detailed accounts of Shark River Slough
trips. Without a doubt, L-67 is the best starting point, aim for just east of Vulture Hammock to a large
unnamed hammock southeast of Vulture Hammock. You can pick up the airboat trail just to the west
of that hammock. Go down L-67 for about a mile to the last open break on the west side of the canal
at 44.688 minutes north and 40.415 minutes west. You're on your own until you get to the airboat trail
but if it's high water you can paddle right through it to the trail. The airboat trail is clear and it's
33 miles to Canepatch from Tamiami Trail using this route. I did it with my son and he, or I for that
matter, had no intentions of sleeping in the canoe so we started before daylight such that it was just
getting light when we broke out of the canal. You can't leave any early as you will need light to find
your way across the grass to the airboat trail. You can navigate Rookery Branch ( from the old
Rookery Branch campsite to Canepatch) in the dark so you need to get down the slough and down
Bottle Creek with daylight. When my son and I did it, it took us 13 hours, we never stopped paddling
in a 17 aluminum Grumman canoe. We came in to Canepatch about a half hour after dark.
However, we had very high water, October last year, the Tropical Storm Fay water push the slough
up maybe a foot higher than it is now.
You must be at a designated campsite or stay in your boat (canoe) for the nights. No special use permit
is required. No backcountry permits are required until the Friday before Thanksgiving.
The reason Bob was visited by law enforcement on his way back was his car was left for two nights at
the parking lot at L-67. There are a lot of problems with poaching and other illegal activity along
Tamiami Trail in that area, law enforcement is serious in that area. His abandoned car was screaming
for attention. I too was questioned by an Indian cop shortly after I launched, they
don't come across too many fools taking off across the grass in a fully loaded canoe an hour before
daylight. I thanked them for keeping up the vigilance.

Permalink Reply by Keith W on October 19, 2009 at 1:14pm
When ThereAndBackAgain (not Bob Quirk, sorry for the mix-up) did his L-67/Slough trip a couple of weeks ago he said that LE was concerned that somebody was spending the night in a 'day use only' area, and sleeping in your boat was not an option.

Esther, water levels tend to drop pretty quickly once the rainy season is over. Something to keep in mind as you do your planning.

Permalink Reply by Terry on October 19, 2009 at 3:46pm
We weren't there and didn't get the whole conversation but it is absolutely okay and legal to
paddle down the slough and spend the night in your boat. I suspect tensions were high after
two days of looking for the owner of that vehicle parked in an area where almost every person
approached is doing something illegal. As a matter of fact you can spend the night in your
boat, as long as it's on water not parked on a trailer in a parking lot, anywhere in the park
except in the closed areas in north Florida Bay. The park rules are clear and simple on this,
camping in the park has to be in designated areas only unless you're on your boat.

Permalink Reply by Keith W on October 19, 2009 at 7:38pm
That is good to know. The gate at L-67 I think has 'day use only' on it, but I always thought that applied just to the levee and not to points beyond it.

Esther, please keep in touch regarding your plans. I have a great interest in any attempts to connect BCNP to ENP and want to try this myself when I have more time and freedom.

Permalink Reply by Esther Luft on October 19, 2009 at 7:55pm
Hey guys! Thanks for the feedback. It looks like the time frame is right with the upcoming lull in the hunting season. I am one of those girls who owns her own machete and various size axes, I do need a new hand saw though. All for home gardening, of course. Let's hope the weather cooperates and we get a few cold snaps in the next few weeks. I'm very hyped.

So right now my plan is to put-in at Mitchell, paddle the airboat trail to Lostman's and take my chances from there. If nothing else, it will be a heck of an experience.

What about passage from Whitewater to Tarpon Bay? Any possibilities there? I'd love to cut some distance off the Flamingo to Canepatch Route. If Bear Lake opens that would help a little but... you never know.

Permalink Reply by Esther Luft on October 19, 2009 at 8:03pm
Oh, absolutely. I appreciate all the info enormously. I got into kayaking with the goal of backcountry exploration. Rolando Williman turned me on to the forum a few months back. Until now, I did what I guess many do, read, plan and plot. Now that season is upon us, it's time to execute some of my harebrained ideas. I may drive you nuts with questions though. Fair warning ;)

When Tony went down from Mitchells Landing, he spent the night at Cocoanut
Hammock. Helped himself to the estate at the hammock (look at the aerials!)
then he when down Lostmans River and spent the second night at the old
ranger station. He described the upper reaches of Lostmans River as my previous
paragraph. Slow progress climbing and dragging boats through mangroves.

Unless you've already done them and are bored of them, I'd stick to the doable
ones - Shark River Slough and Taylor Slough. See our previous detailed posts
on these routes.

Permalink Reply by yakmaster on October 20, 2009 at 8:13pm
Taylor Slough's been done, but that don't make it doable! 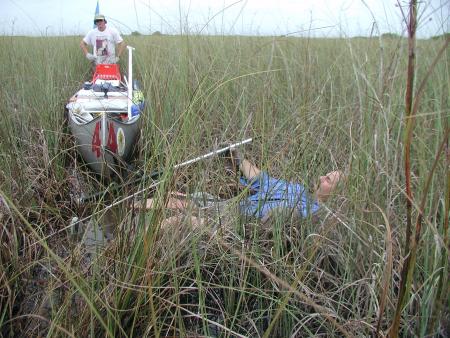 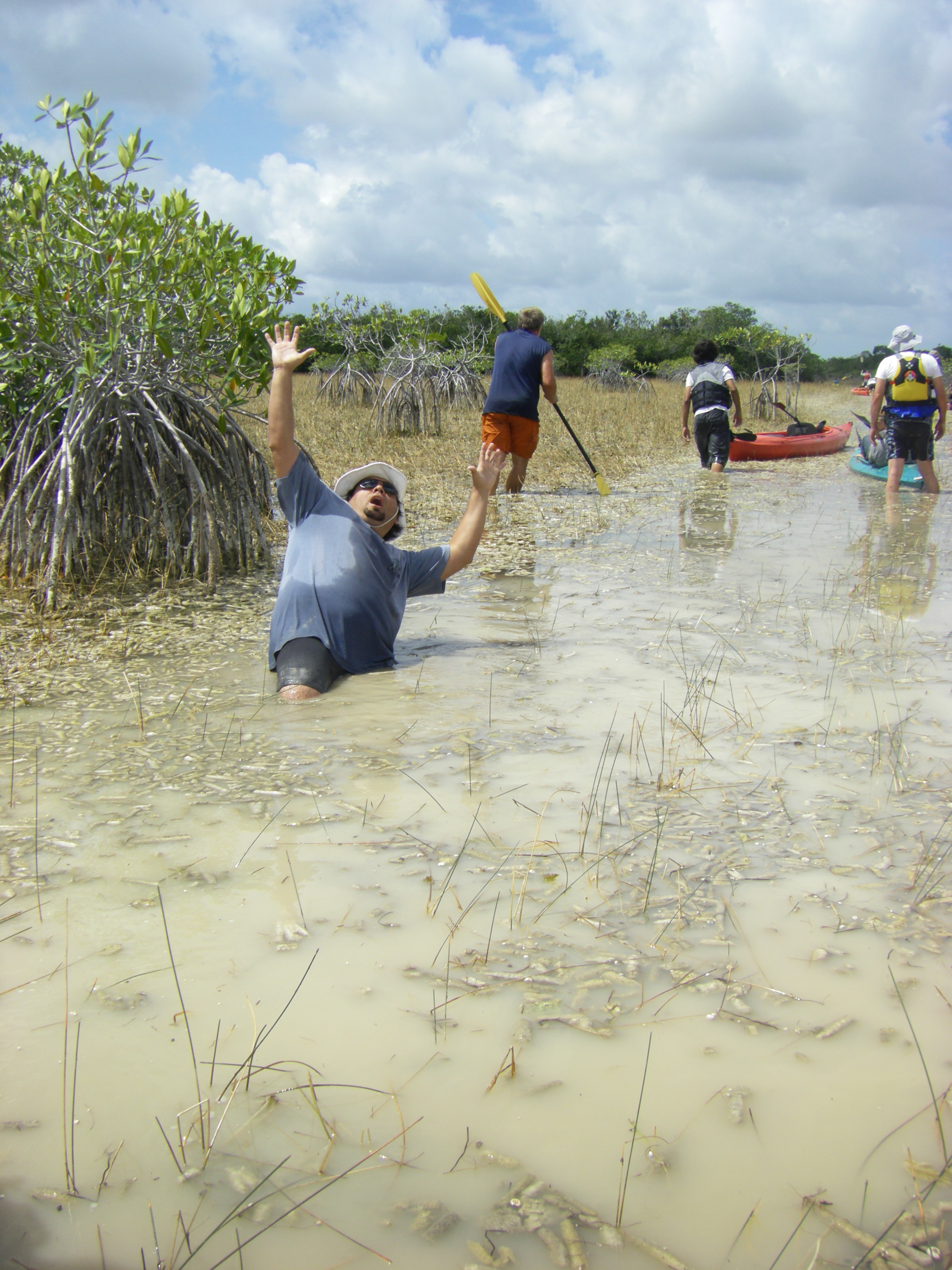 So what footwear do you suggest for this? I take it stilettos and flip flops are out? :)

Now seriously, I'm happy getting in as deep as I can, no pun intended. The rest is gravy

Permalink Reply by Terry on October 21, 2009 at 10:14am
What the heck, I'll throw my hat in the challenge ring - I canoed from
l-67/Tamiami Trail, right down the middle of Shark Valley Slough to
Canepatch and from Pine Island, down Taylor Slough to Nine Mile
Pond. Each trip only took one day and I NEVER GOT OUT OF THE
CANOE! My web picture is from somewhere in the middle of Taylor
Slough, notice how dry and clean I am. Trust me there is worse than
either of these two pictures and it's the dreaded wall of thick mangroves.

This backcountry exploring talk gets me worked up for.....

Where South Florida's best of the best backcountry explorers will descend
on that miserable tiny stretch keeping us from going directly between
Canepatch and Camp Lonesome. Stokes, Allin and Truesdell will be
proud when we make that little parcel of real estate give up all its secrets.