Historic Monroe Station burnt to the ground last night at about 11 PM. So sad.

That's terrible! Dale, do you have any more details of what happened?

I think there were seven of them right after Tamiami Trail was built.
Highway Patrol lived upstairs. The two that advocacy/friends groups
need to move on (raise money, demand meetings with influential
people and stay on it until it gets done by any means - volunteer,
staff and congress) are Monroe and Weaver Stations.
Both have the property, lie in government protected lands and with
appropriate development could have very significant far reaching
or subtle interpretation.

Personally I like Weaver Station, it has a deeper history with
excellent opportunities for a wilderness experience but that's
just my waterways attitude shining through. A group could bring
to the table plenty of interpretive ideas for Monroe Station as well.
The first image is the Weaver Station property on the south side of
Tamiami Trail. There are still some remains of the buildings just
south of the old highway route clearly seen in the image.
The second is Fakahatchee River with Fakahatchee Island seen at
the bottom center of the image. If there is ever a case of letting
a perfectly good river go to overgrowth and shamefully
exotics (Brazilian pepper) this is it. A strong volunteer group
with a well thought out mission could clean up this river and create
a network of paddleable semi-loops connecting an interpreted
historically rich Fakahatchee Island with backcountry camping.
Good parking at the highway, a small outdoor museum and 5 star
launch site could combine access to the East River, Fakahatchee
River and Faka Union River. Water passage over the centuries could
be promoted and integrated into the existing Wilderness
Waterway to greatly enhance the Ten Thousand Island / Everglades experience. 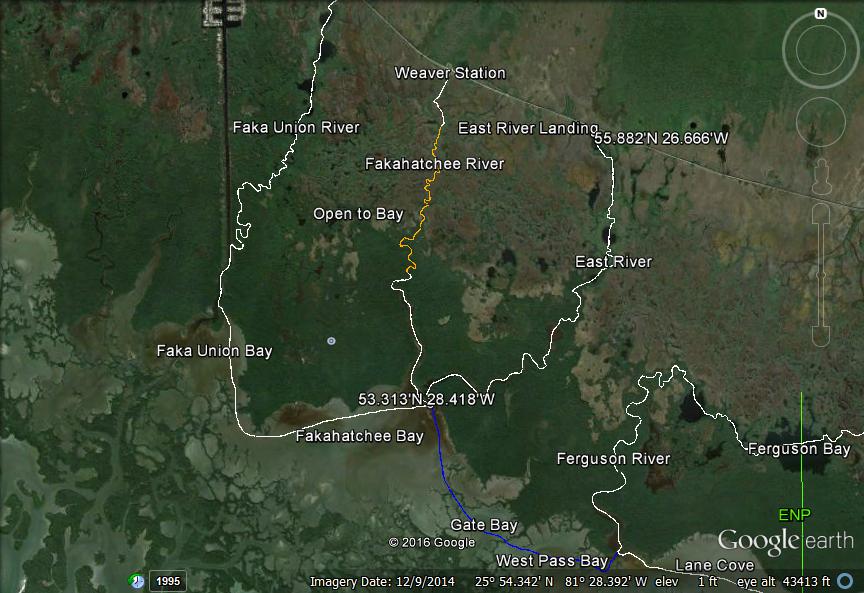 This is the loss of a true piece of history.These stations were built when cars were a lot less reliable. Some accounts treat the original deputized Harley riding station operators as the first highway patrol in the nation!  https://www.nps.gov/bicy/learn/historyculture/tamiami-trail-and-mon...

It was beat to heck, but it was still standing and steps were being taken to restore it to its former glory, if not its former quirkiness!

The South Florida National Parks Trust (SFNPT) had made a grant to Big Cypress to study what needed to be done to restore the building as a historical museum. The NPS had raised quite a bit from the DOT and the SFNPT was in the process of starting a fundraising effort to raise the necessary additional funding.

We were going to bring it back to it's historical stature (back when it was a way station for model T's) though not to it's days as a honky tonk, though I would have liked to be the concessionaire if they did!

Apparently, they know what happened, but that don't bring it back...

On April 9, 2016 at approximately 11:45 p.m. firefighters and law enforcement personnel responded to a fire at Monroe Station. The historic structure, located at the junction of Tamiami Trail and Loop Road, was consumed by fire and burnt to the ground.

Big Cypress Law Enforcement Rangers investigated all leads and within 48 hours focused in on a person of interest. The primary suspect, a man from South Florida turned himself in on April 11, 2016.

The suspect confessed to entering Monroe Station and climbing onto the roof to conduct “Spinning” also known as “painting with light”. “Spinning” involves taking a piece of steel wool that is lit and swinging it in a circular fashion which produces a photo similar to a giant sparkler.

Two additional men from the ground photographed the event. It appears that during the photography activity a fire was sparked. The three men stated that they tried to put the fire out, but it spread too quickly and they fled the scene.

The incident continues to be an ongoing investigation.

Monroe Station was one of six way stations constructed in the late 1920s in the remote reaches of Collier County along the Tamiami Trail. Monroe Station and the Royal Palm Station, located at the intersection of CR 92 and Tamiami Trail were the only two that remained near their original locations, three of the stations have been destroyed over time and one was moved a great distance from its original site and modified for other use. The purpose of the way stations was to provide gas, and other conveniences to travelers.

In the new novel that I co-wrote, entitled "The Legend of Campfire Charlie," one of the chapters takes place inside and around Monroe Station, circa 1960s/1970s.  People who remember Monroe Station back when it was a working store might enjoy the book, and in particularly that chapter.  The book is available on Kindle, but can be read on any device. Here's the link: