Stair Steps (near Coconut Hammock) down to Willy Willy or Mullet Bay.

This one exists it's just a matter of finding it.

There are many advantages to finding Smugglers Run:  It connects

Mitchell Landing down Lostmans Slough to the WW.  It's all established airboat

trail down to the Stair Steps and, unlike Shark Slough, camping is permitted

anywhere in Big Cypress NP.  Just open up a park brochure and look at how close

the Stair Steps are to Willy Willy.  Back in the 1970's you could hear the airboats

when camping at Willy Willy, I've wanted to find the route ever since but

Use the same methodology as documenting the Lost Portage:  During the

drier season (now) base camp at the nearest campsite, Willy Willy, locate the

route, document it and next October, maybe November depending on water levels,

paddle it from Mitchell Landing.

I'm in for a hike.  An overnight?  This month?  Doing the 9 mile with some of you this weekend.  the 22nd-23rd doing an overnight hike around fisheating with FTA group.

I see the same structure. im not sure what it is. looks like a platform with small boardwalks. I would think sponge drying racks would have been built closer to if not over the water out in the gulf.  it looks like it was built where it stands. On google earth i turned the image back to 2010 and it looks like there might be 2 canoe or kayaks next to it that aren't on the most recent image. would be awesome to check out. looks pretty easy to get to.

This one needs a bunch of homework.

end of the little bay at Willy Willy.   But with the new images I'm seeing old airboat trails

going in the direction of Mullet Bay, that could be why the route eluded many in the 70's and 80's.

that isn't the same shape as the flume or dosing stations in the sloughs.   Old sponge drying

racks??  There's has been a bunch of stuff going on down there for a long time and first

everyone must stare at the aerials.

weekend.   I'll bet once a hidden opening is located there will be an obvious well used old route -

Glad we are not out there today!  That is a nasty line pushing through.

I ran in to one of the "lurkers" of this forum saturday, 3/15/14, back south of paces dike.  He described the history of cocoanut hammock as having been a seminole trading post through which much commerce came from flamingo and everglades city.  this would bear out the idea that a well used passage is waiting to be found.

On another note, has anyone done any research on the 2 nearly parallel canals out of Dad's bay and Plate Creek bay?  these seem like candidates for what I heard someone mention as a canal associated with the lost passage.

My guess is these were dug in association with the Poinciana development project I posted about elsewhere.  Here's the coordinates of the canals:

both canals show open and usable in this 1966 Monroe county resource map:

But I'm thinking the lost passage is going to go out through cabbage bay or rocky creek bay.  both show water passages up into Big Cypress in the vicinity of Cocoanut Hammock

Just ran across this topo map from 1973.  It clearly shows the airboat trail (out of mitchell's landing) coming down to cocoanut hammock down dixons slough and then turning west.  However, on the the map, it shows dixons slough to be navigable down with a tributary that appears to begin at 25.610 & -81.0290.  This tributary appears to be the one to take into Rock Creek Bay.

Hint:  use this searchable map to locate the name of the map you need to download...its far easier than trying to guess what the feds decided to call a section of the everglades:

Just ran across this topo map from 1973.  It clearly shows the airboat trail (out of mitchell's landing) coming down to cocoanut hammock down dixons slough and then turning west.  However, on the the map, it shows dixons slough to be navigable down with a tributary that appears to begin at 25.610 & -81.0290.  This tributary appears to be the one to take into Rock Creek Bay.

Great stuff!! This will be a most excellent adventure.. :)

I've been doing more research on this area.  Here's some more links and a letter from Ted Smallwood documenting the (re)discovery (and subsequent loss) of the location of Fort Harrell on the New River:

here's a link to a 1856 military map that shows OK slough connecting to turner river.
http://fcit.usf.edu/florida/maps/pages/3700/f3793/f3793z.htm
The map also shows old military and commerce trails heading down into the thousand islands.  Apparently the New River strand/slew was navigable well up into the big cypress back then.
to get the detail, click the plus sign then after zooming with that to the max magnification, you can right click the the map and select "zoom in".
Notice what looks like a serious trail or train to Fort Harrell, which, according to this book on page 160 (http://books.google.com/books?id=Ck6BYBqEunMC&lpg=PA225&pg=...), stood along the New River.  For a real challenge, check out the mystery on page 168:
http://books.google.com/books?id=Ck6BYBqEunMC&lpg=PA225&pg=...  - a marker was placed in 1941 to commemorate the fort but neither has been spotted again.
I bought the digital version of this book for $3 just now and check out Ted Smallwood's comments about this Fort: 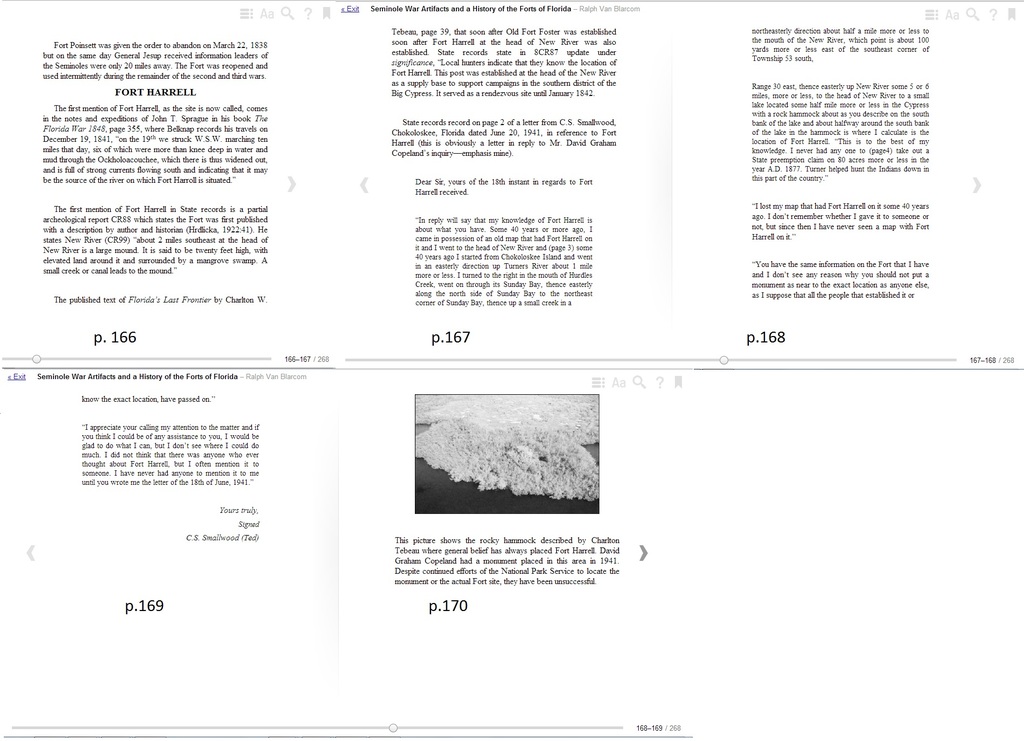 So....what's the scoop with an october sawgrass run to rookery branch or....dare I suggest...Broad or Watson Creek?

If not, how 'bout that cocoanut hammock run out of Mitchells.

I'll be tied up with school and a move through mid-September, but after that I should be jonesing for some mosquito bites ; )