A backhoe breaks through the roadbed of the old Tamiami Trail

Down the canal and under the bridge.  The photo was taken from the dike. See the grass on the bottom. Too bad they couldnt push the dike and the roadbed back in the canal where it came from. Its an improvement however and a nice bridge.

Great start for the re-awakening of the grass!!

Great news, and nice shot of the action Dale.

Permalink Reply by Connie Mier on May 16, 2013 at 5:17pm
Anyone have a caption for this photo? It takes one guy to drive the backhoe, and 25 guys to watch!
In the meantime, It's a thrill driving over the bridge knowing it was built with the good of the Everglades in mind.

I wonder how strong the current was.

That is just so cool!

I've been paying attention to all things Everglades since I was in highschool and it seems like it has  always been bad news, always something sad or downright maddening.

I'm having a hard time coming up with something in the news that made me feel this good, although I expect there will be plenty of unexpected downsides to the changes back to what once was normal.

Hopefully this is the beginning of a new era for the Glades.

The bridge is only 1 mile long and you will come to it fairly quick just west of Krome Avenue. Its just west of the Miccosuki casino.  The preferred plan would add an additional 5.5 miles of these bridges and if approved they will be working on it for years. http://www.nps.gov/ever/naturescience/nessrestoration.htm 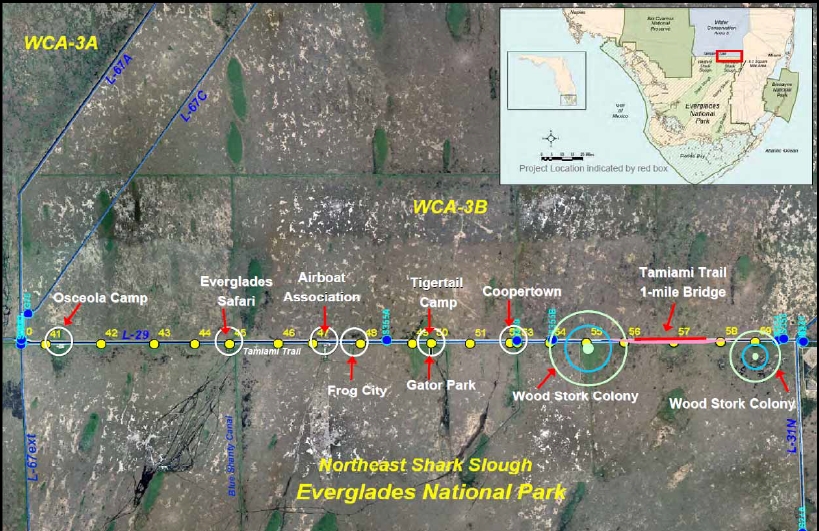 The water still does not flow naturally. Looking at the map above, the water from WCA-3B does NOT flow directly south, under the bridge, into ENP unless they remove the L-29 levee where the cameraperson was standing that took the picture.

In a round about way, the water flows down the L-67 canals to a flood gate just west of the Osceola camp.. When the gate is open the water flows east down the L-29 canal.  When it reaches the bridge it will go under. With the new bridge, more water will go south and less to the ocean.  Its an improvement over the culverts but it appears they still refuse to give up control of the water flow and push down the levees and fill in the canals..

Very cool thanks for the shot.

"...it appears they still refuse to give up control of the water flow and push down the levees and fill in the canals"

That's not true. The CERP Decompartmentalization and Sheet Flow (Decomp) enhancement project will do just that:

'The project's goal is to restore sheet flow between WCA 3A, WCA 3B, and Shark River Slough by removing obstructions to natural flow patterns caused by canals, levees, and roads. Conceptual design features include backfilling all or part of the Miami Canal south of S-8 to the east coast protective levee, increasing the conveyance capacity of the North New River Canal (to compensate for that lost from the Miami Canal), elevating and bridging portions of the Tamiami Trail, and backfilling/degrading L-67A and other levee-canal complexes (L-68A, L-67C, L-29 and L-28). 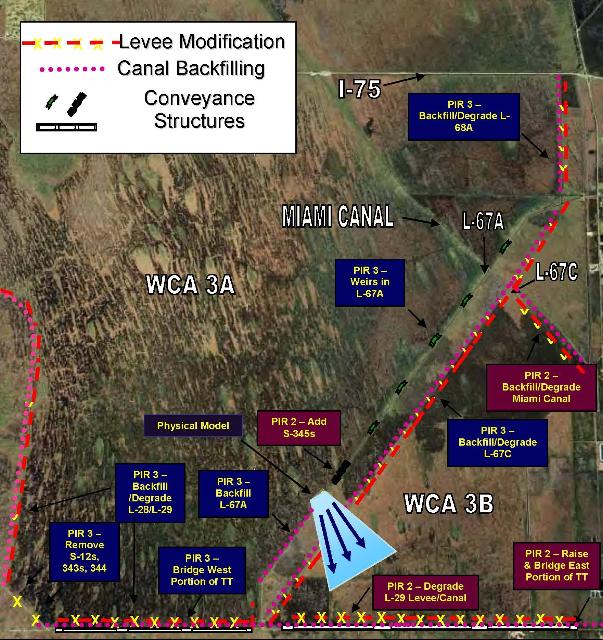 The USACE and SFWMD are preparing to begin the Decomp Physical Model (DPM), a field-scale test designed to address hydrological and key ecological uncertainties prior to deciding on whether to effect permanent removal of levees and backfilling of canals (USACE and SFWMD 2010). Scheduled to begin in early 2011, the DPM is intended to increase knowledge about the potential effects of restoring sheet flow and ecosystem connectivity. The primary goals are to (1) "understand the effect of increased [flow] velocity and durations on ridge and slough biogeochemistry and (2) determine the effects of complete backfilling, partial backfilling, and no backfilling on hydrology and sediment transport" ' (Harvey,  Loftus, Rehage, and Mazzotti, 2010)

So, it's not a matter of simply bulldozing levees and filling canals. Gary has it right, there will be consequences, maybe not all them good, to effecting such a radical change. This is something that must be done carefully which will take time.

Effects of Canals and Levees on Everglades Ecosystems