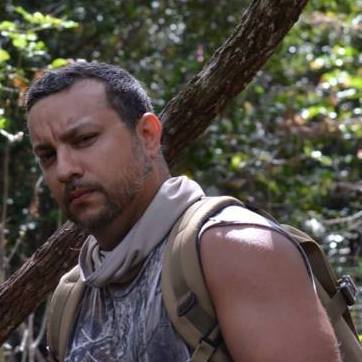 Miami101 has not received any gifts yet

Let me start by saying this looks to be a great site, and I hope to go deeper into the Everglades. I spend long hours at night over looking at the maps dreaming of the fish that are that next turn. I have included some photos, and not all of them are from the Everglades. Also not all Kayaking. I find that even some of the location in the Urban city are not explored, and have found some sweet spots in Dade in Miami that Mangroves gardens can be found.

Here is my intro hope to meet people, and perhaps share a good cigar:

Well it came to me one night: My brother and me somewhere around mid Key on our Gheenoe.
We had taken water for some reason waves came into my boat, and I started the engine to move near in to Mangrove before taking on more water. I started the bilge pump and watch it break into a few parts. I started my engine and headed toward the Mangrove as my boat slip into the dark water colored in a red brown hue. The last thoughts on my mind were "save the rods" as my brother swim toward the Mangroves.
Under I went into that brown red water I had cross over so many times, and up I came reborn again into a brother hood of man before me who had tasted the wild side to the Everglades, and the untamable land know as god’s land.
I gathered my rods, and anything I could find and put them on top of my boat. I made my way to the Mangroves once there determine we made our way toward Tarpon creek paddling a 600 pounds for some distance. I was lucky for having Kayak this area before gave me a heads up , and in my camera I had even taken photos of some of the button wood trees that where shape like sexual objects. This being one of my strange hobbies, and helping me remember locations in the Everglades. We made our way closer, but had to sleep out under the stars with temperatures dropping well into the 50’s. I had been able to save a few wet cigars, and even a few bears. As the night begin to make it way in the Dolphins started rolling in, also some other strange bird like creatures, random lights in the sky/water, and other things unknown.
I found myself more in love with her then ever. I ponder that night hoping that somehow the future of the Everglades would turn out O.K, and that we see the value in keeping such beauty alive. Also my hopes to one day bring my son here, and of the people like Totch who had written, and describe this place in such a way that made me want to come here almost every weekend, and any chance I could break away from work, and family.
My wife had called the Rangers, and he told her those guys I know where they are do they still have that blue Hobie kayak….Wife no they are on a red Gheenoe…..Ranger told my wife those guys are O.K., and told her I watch those guys before funny two guys with Cigars, and fishing for Tarpon. He even told her that one day from the ranger station he saw us push two miles on mud on our kayak with an anchor, and paddle….. (Entirely brother fault chasing fish, and not the tide!) The Ranger headed out to pick us up.
With that said my name is Carlos I love to Kayak, and put in the water almost any spot that permits from the Keys, to Lake Worth, to even some of the rivers that run in from the Ocean on down to Hialeah chasing Snook when the cold is setting in. I love the everglades it is my home away from home, and not many people understand why my face lights up when I talk about her.
I hope to keep going, and learning more about her, and treat her with respect. She is beautiful beyond any words that any men, or women to could dream of…………………………

Happy to be here
Carlos

You need to be a member of Everglades Exploration Network to add comments!

Miami101 said…
Sounds great I have gone to Mud lake about five times, and Bear lake once. The birds, and fishing is out of control I kind of kept it to myself I'm not into people.

Out of the five times I went back in that area last week there was only one person in a Gheenoe with a 15 HP on it. I told the guy it was a none motor area in a nice way. He did have the engine out of the water, but not removed. I let him know in a nice way that the rule was to remove engines before entering that area. He was with his kids, and respond in a nice way. I felt kind of bad, but have to protect these areas.

Other then that I went out with Terry/Keith to check out the new trail from Noble Hammock to West Lake, and the trail is very nice. Terry & Keith did a great job providing information on the trail. I think they are working with the park to add it, and there was talks to help with Long Lake, and other paths.

I'm in if any one needs me. The funny thing I started as a hard core fisherman, and keep finding myself more into finding new paths, and bird photos.

Your trips sounds good it on my list of places to visit. I think the gates are still closed for now.
Let me know when you guys go out to keep working on the trail I'll be more then happy to help.

Have a good new year....
Carlos

Bob Quirk said…
Hey man, hope you had a good christmas. I'm in Sao Paulo today flying back over New Years eve. I think we are planning on hitting the trail the end of next week. I hope they got the road open last week like they planned. I do know all the interpretive rangers did the loop in preparation for tours. So things should finally start happening on the trail. Have a great New Years.