Summer Camping - Not so bad.

Reference Bill's "Bucket List" discussion.  Bill, Gary and I planned to explore the west end of Bear Lake to see if it looked like a push through the skinny @64 meter wide tree line westward to the "soupdoodle" area and then towards the ECC would be possible.

The weather leading up to the 6/7 weekend  was marginal.  The trip was on-again-off-again. Bill was unable to get a second paddler for his canoe.  So it was Gary and I. I headed out to stage as far west on Clubhouse as possible and camp.  The plan for Sunday AM was for me to head out to ECC and then noodle around and eventually meet up on the west side of the trees at a point we called 64m at mid-day and we would see what it looked like.  Gary's plan was to head out of Coot Bay Pond and work his way down to the west end of Bear Lake and we would hook up via VHF and look around.That was the plan.

I got on the water @2pm Saturday and got out to Clubhouse @5:15.  Nice paddle.  A little warm.  Listening to the wx radio - heat index was over 100 in Marathon.  There was a nice SE breeze at 10-15.  I landed and set up camp.  High concentration of Dear Flies.  I was pretty covered up.  The only exposed skin was my feet.  The breeze was keeping the flies down low - so it wasn't too bad.  Decided not to put the rain-fly up due to the nice breeze and pretty clear skies.  Paid for that @ 1:30am when a squall line came through.

After the squall came through the winds went East a solid 15-20+ and stayed there.  The plan was to do the noodling on Saturday to 64m and head back for a second night on Clubhouse then head back Monday. I had an issue pop up which necessitated me getting back to Flamingo by mid morning Monday.  I could see with the wind, that probably would not be possible if I did the probe and camped again.

Sunday am, I broke camp @7:30am with the wind solidly @15-20 out of the E-ESE (kept the flies and skeeters down).  I actually started heading towards ECC for about 10 minutes doing almost 5knts....and quickly came to my senses and aborted the trip.  Took me almost 40 minutes to get back abeam the campsite.    So then began my nearly 6 hour slog back to Flamingo.

Mid-day, I was able to raise Gary on the VHF when I was about a mile short of Curry Key and told him I had to abort the probe.  Made it back to Flamingo @2:30pm.

Overall the camping was nice.  It was certainly different. Into the tent by 6:30pm to avoid the onslaught.  Made it inside with no hitchhikers. If I had a pair of socks and tucked the pants into them bugs would have almost been a complete non-issue.

On another issue - I took a break from the wind on the way back in Slaigle's Ditch.  Ran into a power boat with motor running way past the no motor sign.  Tried to get a picture of their registration number but they took off pretty quickly when the saw me and didn't get the pic.  Plenty of Tarpon back there. 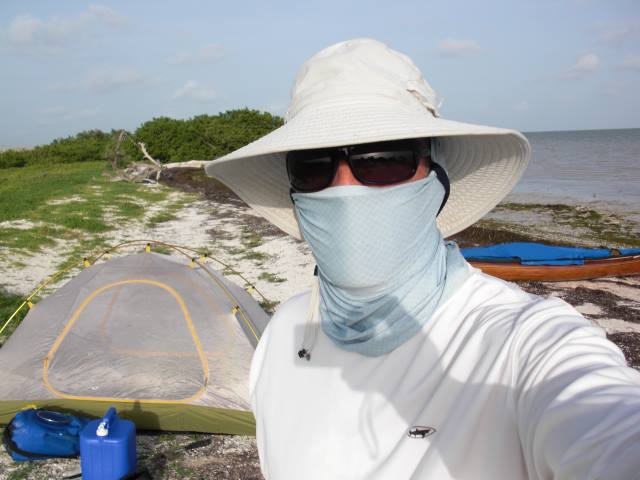 Permalink Reply by Amazon Bill on June 15, 2013 at 8:14pm
Jay, I was watching your Spot track and cheering you on. I saw you head east and the 10 minute spot pings were spread atleast a mile apart. This fall with north winds would be a good time to try again.

Bill - I will have to look at that track....going east felt like about 1 mile every hour into that wind. Dale - white/light is the color of the season for sure.

You guys are crazy!  However, I still enjoy the reports especially in our slow season so keep them coming!  I think bringing a CCS 10 x 10 tarp and putting that over the tent would be a good way to keep the rain and sun out while keeping the fly off.  Here is a picture of my friend Toby who LOVES summer camping in the glades with such a system.  I love the CCS tarp it is really well made, bring a couple of take apart poles and stake it out using some 12" stakes at the two back corners. They use their Krugers to stake out the tarp: 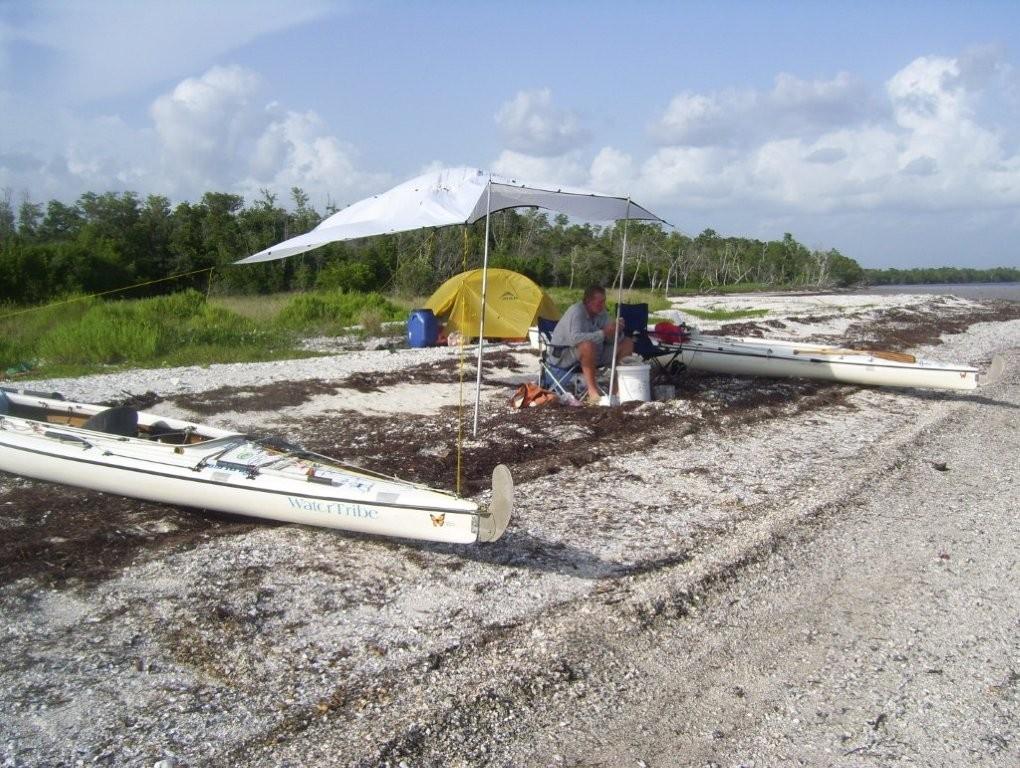 Thanks Vivian - makes us appreciate the winter.  CCS makes great stuff.  Overall -it was very enjoyable.  The breeze that made the paddle back a challenge, also kept it bearable.

If you got a photo I might know who they are? They are very few boats that can make it into those area. Post up the shot!