The Lost Portage is no longer Lost

Over the weekend of December 4-5, our team of six made the connection known as the Lost Portage, between North Harney River and Broad River. Up until now, the only route between Cane Patch and Camp Lonesome was nearly 30 miles long and took two days to travel. We have shortened this connection to about 8 miles that should take no more than 6 hours for the average paddler to complete. The actual Lost Portage passage is less than 2 miles long.

Outward Bound groups have done this before, and they are the ones who gave the Lost Portage its name. Their undocumented routes plowed straight through heavy sawgrass and they dragged their boats almost the entire way. They took two days to make the crossing and spent the night in their canoes. We have managed to find a clear, open route that can be done in less than 3 hours, and impacts the sawgrass prairie far less by following navigable water trails at every opportunity.

While every Wilderness Waterway paddler should experience the Nightmare (until now, the closest thing to a 'shortcut' between Cane Patch and Camp Lonesome), those desiring more in the way of adventure on their next trip should consider the Lost Portage. However, before you start making plans, I'd like to make it clear that this is not a route for beginners, and even experienced paddlers should be well prepared before attempting this crossing. I'd also suggest that you don't try to do this solo until you've had a chance to cross at least once with a companion. You don't want to get stuck out there alone without any help. There are areas of shallow water where you may need to get out and pull your boat, and you will encounter holes that will open up under your feet and send you chest-deep into the mud soup without any warning. There is a ridge of high sawgrass about 200 yards wide that you will need to pull your boat and gear across, and the central section of the Lost Portage runs through a series of interconnecting freshwater ponds that are difficult to follow on the ground. We will post a GPS route as soon as it is finalized, but the bottom line is that there is great potential for getting lost unless you are very observant.

Now that the 'gotchas' have been listed, I guarantee that you are in for a real treat when you finally get to cross the Lost Portage! 99% of Everglades paddlers never get past the wall of mangroves that lines the Wilderness Waterway, and the Lost Portage provides a rare glimpse into the deep sawgrass Everglades that very few ever get to see from the boat, and that you will never come close to duplicating just by driving down the park road. Being there up-close-and-personal is the way to go.

Permalink Reply by vivian on December 8, 2009 at 9:03am
That is really great news! I can't wait to see the track and hear the whole story. So the trail was there and you did not have to cut through?

Permalink Reply by Keith W on December 8, 2009 at 1:50pm
The trail was 'there' in the sense that we just had to find and record it. Except for the Tarpon Bay end that is called the South Portal, we saw no sign that people have ever been back there. The pond areas were wide open and just needed to be connected. The mangrove creeks were a lot like Noble Hammock and Hell's Bay, and were entirely passable with deep water. What makes our route so cool is that we were able to do it with very little impact to the environment, abiding by the 'leave no trace' ethic. We're going back there very soon to see if we can reduce or even eliminate the short section across the sawgrass.

Permalink Reply by ThereAndBackAgain on December 8, 2009 at 7:41pm
Congratulations on your accomplishment. Impressive. Thanks for the story,

Permalink Reply by Esther Luft on December 8, 2009 at 8:35pm
Congratulations! I can't way to reap the fruits of your labors : ) I'm so excited for you!! Great job folks. 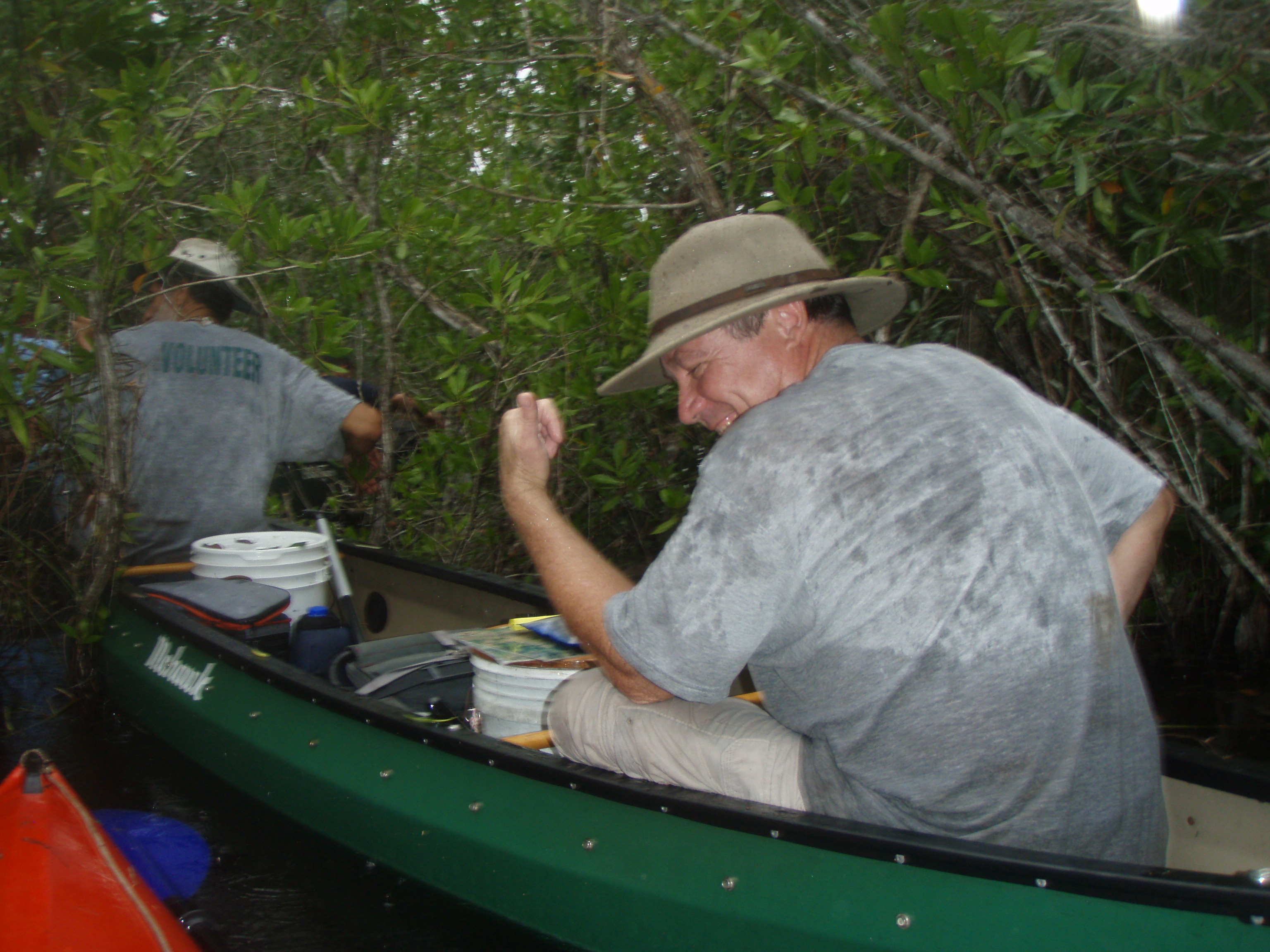 The sweet taste of success!

That was a hell-of-a-trip, happy 40th Wilderness Waterway!

Permalink Reply by vivian on December 9, 2009 at 7:42pm
That canoe looks too clean to have gone through the Lost Portage :-) Can't wait to hear the story.

Permalink Reply by Miami101 on December 10, 2009 at 9:57pm
I look forward to hearing about the path. These days with my 1st baby in the house my trips are very short, and I feel so behind. If anyone needs someone to paddle with, or short trips let me know.

Permalink Reply by Esther Luft on December 10, 2009 at 10:04pm
Take a look http://www.meetup.com/miami-kayak-club/ We do a lot of more adventurous day paddles. More fishing would be great. If you have any requests, we're always open to them. Paddles range from the recreational to the are-you-nuts paddles. In the end, we just have fun.

PS Congratulations on the baby.

Permalink Reply by Flex Kayakfari.com on December 23, 2009 at 10:38am
yeah please post more details, as i'm down for closing the gap myself! sometime in february .. would make a nice adventurous trip!