Just back from a solo 10 day through trip.  First - thanks to members of this forum for suggesting ideas for my route and thanks to my family for supporting this adventure. When I decided to make this trip, I decided to build a canoe with this kind of trip in mind.  So my adventure actually started about 15 months ago when I started construction on the canoe.

The weather forecasters don't know squat....but as a pilot...I already knew that.  The forecasts are good for a couple of days but after that things can go very differently.  In my case in the days leading up to the trip it looked like a pretty benign forecast, relatively light winds, comfortable temperatures and mostly dry.  The comfortable temperatures and mostly dry conditions were as forecast - the winds were not. The first night on the trail, the forecast started changing and we got into a 1 week period of moderate NE winds 15-20 with higher gusts.

I knew I was in for a couple of tough days.  I had planned for a pretty sheltered route due to the uncertainty as to whether my spray deck would be completed in time for the trip.  I actually got it at 5 pm the night before departure - and I am glad I got it.

Here is the route in brief:

1. Hells Bay Canoe Trail Launch to Lane Bay - Getting to know the canoe with a load near it's max design - I love it - Super stable - I love the momentum it carries. Spectacular sunset.

2. Lane Bay to North River - From @Roberts River Chickee (lunch) to North River via the Old Camp route - no GPS points.  One of those things - the points didn't transfer.  It was fun and only got turned around once.  It was nice to have the security to know that if I really got messed up I could follow my track back out.  It was fun picking through the route.  Google Earth maps were a plus.

3. Lane Bay to Shark River - Via the North Watson Route - again - GPS points did not transfer - another fun day.  Lunch at Watson River Chickee.  NOTE: Shark River Chickee roof has a hole in the middle - did not put my rain fly up and found out the hard way.  Note to self - always put up your rain fly.

4. Shark River to Cane Patch - To this point, I had not seen a human - or heard a boat - that's 3 days - nice!  As I was packing up a flats boat pulled up to offload their gear for the next night. I had scheduled a late morning departure due to tides.  The wind was blowing NE 15-20+ knots and I knew it was going to be a long day. Took the Shark to Avocado Creek and into Cane Patch.5+ hours later I arrived to find one flats boat.  I walked into the site to find it absolutely packed.  Lot's of big tents, pop-ups, 2 kayaks.  Not a soul to be found - very spooky.  I did hear snoring coming from one of the 1 man tents.  Soon 4 other flats boats arrived with their occupants.  I was expecting the worse - but these guys were awesome.  Extremely friendly, respectful, generous.  Turns out this is an annual pilgrimage to Canepatch (I think 14 years) the weekend after Thanksgiving.  The two kayakers were adopted 3 years ago after they stumbled upon the crew after a similarly long day.  I was treated to a wonderful pork butt dinner, drinks and a gallon of water for my travels.  A fun evening in a circle telling jokes and stories.

5. Cane Patch to Harney River - Via the North Harney River.  Once I left the Patch, didn't see anyone the rest of the day.  The wind was still blowing and I could have stayed on bigger water and caught the tailwind to go along with the outgoing tide - but decided to stay on plan with the N. Harney.  Stopped to fish several times and had such a good time....that I stayed at the party too long. The tide swung and I had the last 3 miles into the tide.

6. Harney River to Highland Beach - Via the Nightmare.  I had a high tide at @4pm.  I decided to leave as soon as the tide swung from low.  I got underway when the water was about 9" up from dead low.  I had no problem getting through due to tide.  There is some fresh live-fall but the trail is passable.  Exited into the Broad on the gently falling high tide into an absolutely breathtaking sunset.  Worked hard to get down the beach to get set up before nightfall.  Landed a couple of hundred yards past the campsite sign.  Eating dinner on the beach with my head lamp I got up and caught the sight of green eyes peering from the grass.  Thinking I might be getting an early visit from some raccoons. I went up to scare it off.  What I found unusual was that as I approached the critter did not run off, so I made some noise.  I got around 5 yards off and it still hadn't moved....that is when my lights picked up the silhouette of a Panther.  I cut my light to high and there it was.  A beautiful cat.  We checked each other out for about 10 seconds and it bounded off to the woods.

7. Highland Beach to Plate Creek - I had a low tide @ 9:30AM.  I planned on a departure at dead low tide in order to be at the mouth of Lostman's River as the flow started.  Well the wind was up again this day and it turned out to be the toughest paddling day of my life.  I have had much longer days in both mileage and time, but never such intensity.  7 hours later, I arrived at  Plate Creek.  The standing waves on the incoming tide were significant - glad I had the spray deck.  Had a squall line come through with gust of 35+.  Lots of time seeing 0.8-1.2 on the GPS speed.  After a day like that, Plate Creek was a dream.  NE winds, cool temps and absolutely stunning sunset

8. Plate Creek to Sweetwater. - Up the bays.  Stopped by Darwin's Place for lunch.  A pair of flats boats pulled up for lunch.  The gentleman on one of the boats greeted me with "Is this your third day"  I said no - 8th day.  He said -"heck you would probably like one of these" and threw me a Gator Aide and offered me a sandwich  He looked sort of familiar but I couldn't place him. The three of us talked for about an hour, politics, fishing, canoe construction.  He gave me a fishing lure - "chartreuse is the color" - and he was right.  Then he started up his boat announced the bay they were heading too and said "I have the north end, you have the south end - looser buys dinner" and he was off.  His partner said - "I have know him since middle school - he has been that competitive ever since I've know him - that what made him such a great golfer".  That is when it clicked - Andy was Andy Bean - Professional golfer - a very nice man.
Arrived at Sweetwater. Three gators patrolled the pond.  Went fishing with Andy's chartreuse lure and released several nice Trout and my bazillionth Ladyfish.  Sweetwater needs to have the decking replaced. It is splinter heaven.  Several boards are not attached.  Guys, be careful walking to the edge of the Chickee - you know what I mean - you may be in for a swim with our friends patrolling around.

9. Sweetwater to Crooked Creek - Stayed to the bay extensions north of Huston's Bays.  Didn't see anyone.  Of course heard the boats returning once I got to Crooked Creek.  After I got set up I went down to Lopez River to walk around that site.

10.  Sweetwater to Turner River Canoe Ramp - After running the Turner in September, I wanted to use that as the terminus of the trip.  I headed out early to catch the tail end of the tide.Entering Cross Bays it was slick calm and sunny.  Extremely serene. I was cruising across the flats on a high tide - the water was about 3-4 feet deep  I was reflecting on the past 9 days - doing about 3.5 knots when about 6 feet in front of me a depth charge went off about 6 feet in front of me a wall of water over the bow and spray at least 6 feet in the air.  I had startled a pair of Manatees in very shallow water.  Well that'll wake you up!  Anyway it was a nice run up the Turner.  My wife and daughter had run a relay to the parking area with my car the day before..and it was there as expected.  Trip odometer - 103.0

It was an amazing trip.  Thanks to all here who gave me ideas along the way.  I carried a SPOT and will put together an adventure page for my non-paddling relatives.  I will post the link if anyone wants to look at it.  At some point I will get the GPS downloaded and I will post a map of the track.

One other interesting tidbit.  I have a daughter with a Masters in Exercise Science.  She encouraged me to wear a heart rate monitor for the paddling part each day.  We just downloaded the data and it looks like the paddling caloric burn was @ 24,000 calories.  I began at 211lb and finished up at 203lb. I ate like a horse - but evidently that was not enough.  I will post more info when that gets all digested by my "Trainer". 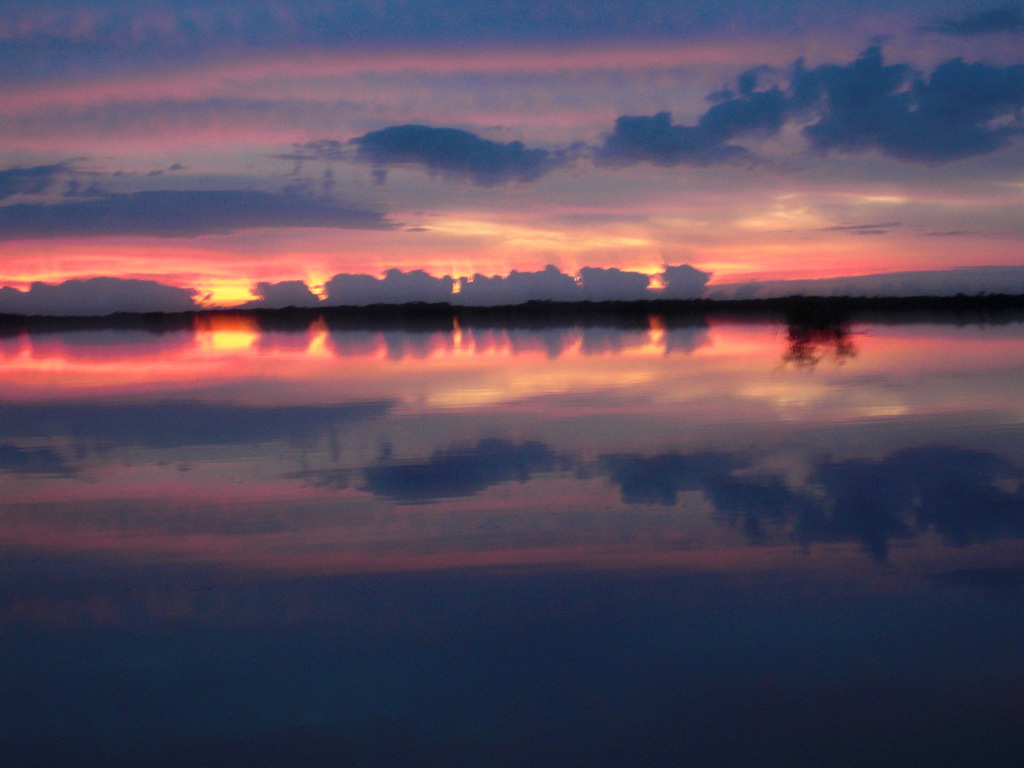 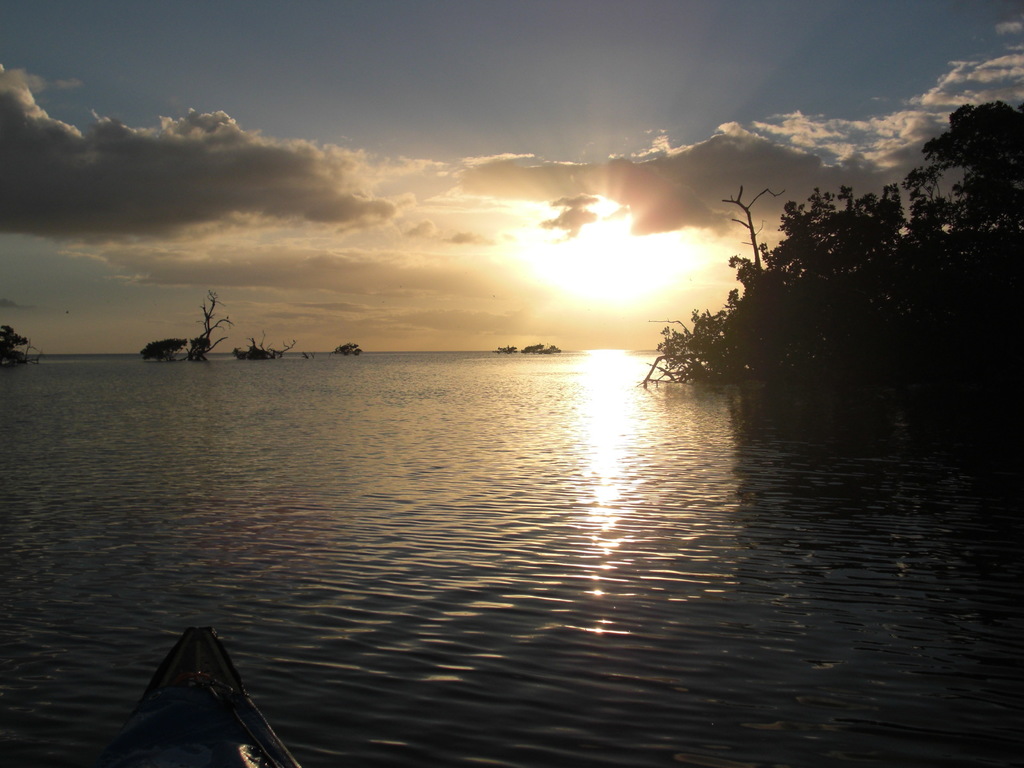 Mouth of the Broad River

Permalink Reply by vivian on December 7, 2012 at 8:49pm
I thoroughly enjoyed your trip report. Was that a bobcat or confirmed panther on Highland?????

Are you happy with the canoe design and is a rudder on the next stage of development?

Thanks.  Good question regarding my sighting. I am not a biologist I really had not considered a Bobcat.  I know a Panther is distinctly much larger than a Bobcat.  The next morning as I took a long walk down the beach, I noticed and photographed tracks.  I saw 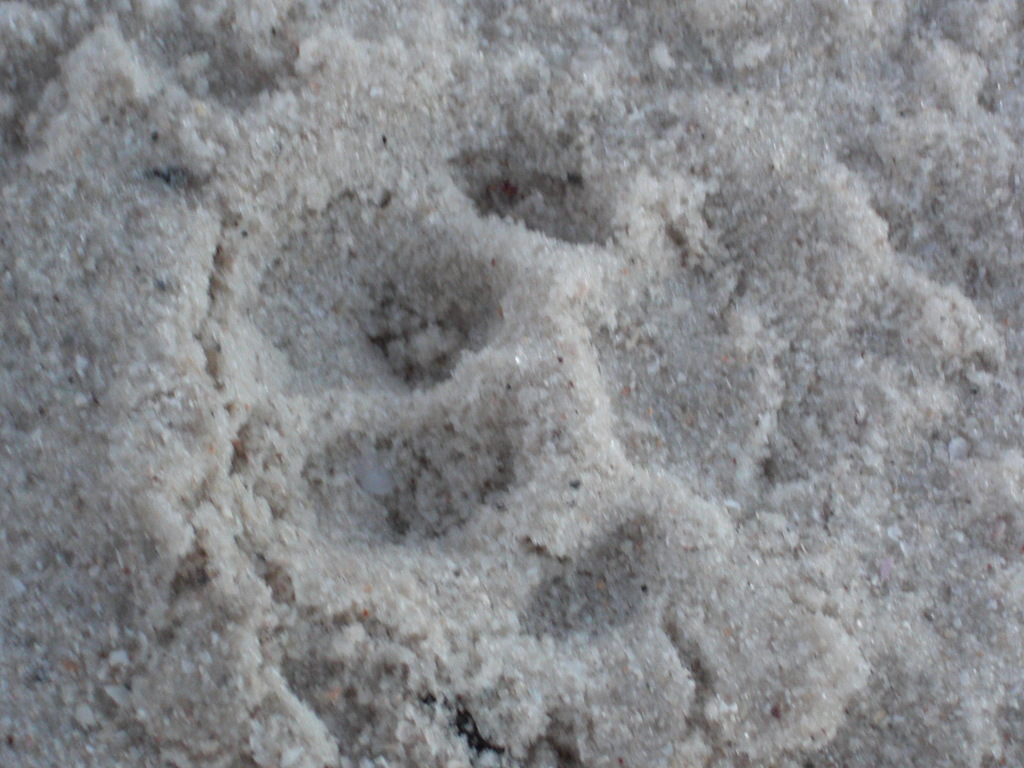 sets of cat tracks of very different sizes.  I did not put anything next to them for scale. So how about we call this sighting a possible.... Regarding the design - love it.  It tracks very well. A little lean helps the turn.  I love how it feels with the heavy load - can you say momentum?  I have not put any rudders on any of my paddle craft.  It is not that I am a purist or anything.  I just learned to paddle without them so I just don't need them.

My wife is a intermediate paddler - she learned without a rudder and she does great.

By the way, crossing the flats off Highland beach, I did some "poling" with my bend shaft paddle from both a kneeling and sitting position.  Really got the canoe moving.  Easily kept up 3-3.5 knts in foot deep water.  Like that bend shaft paddle.

It looks like a great trip my firend. These days I'm lock away behind a desk, and living via your photos, and postings. Thank you once again for posting.